See Chicago 10, unless by chance you are a dolt. 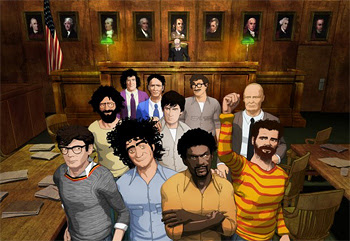 I've been asked to say something about Lukas Moodysson's avant-garde curiosity Container, which just made a belated appearance on my 2006 top ten list. I hope to get to that this weekend, but in the meantime, do me a favor and ignore the passel of mixed and negative Chicago 10 reviews that just saw print, which merely regurgitate the wrongheaded reception the film received when it premiered at Sundance a year ago. I am so very weary of reading stuff like this, courtesy A.O. Scott:

Here’s a small quiz: Who did the Democrats nominate in 1968? What candidates opposed him? Which Republican did he face in the general election? Who won? Anyone who doesn’t know the answers will not learn them from Chicago 10, a movie about 1968 in which Hubert Humphrey, Richard Nixon and Robert F. Kennedy are never mentioned, and Eugene McCarthy’s name is heard only in passing.

Apparently, director Brett Morgen made a terrible mistake in failing to sit down and draw up a list of every '68 factoid that a completely ignorant potential moviegoer might not already know, and then ensure that each one is addressed somewhere in the movie. Because of course the purpose of a documentary is to convey factual information to the viewer. Just like a book, only there are pictures! That move! Doesn't that make the expository nature of the enterprise so much more entertaining?

What makes Chicago 10 such an arresting experience is that Morgen truly doesn't give a damn about providing historical context. He's filmmaker enough to assume that you already know the pertinent details—and that if by some chance you don't know them, you shouldn't be learning them from a goddamn movie. Instead, he offers something far more valuable: a fully present-tense experience, one that comes as close as a 90-minute feature possibly can to conveying, for those of us too young to have been around or to remember (I was in diapers), what it must have felt like to watch it unfold. I made this argument at Sundance (scroll down a bit), but was heartened today to find Andrew O'Hehir's interview with Morgen at Salon, in which my new hero makes many of the same doc-based complaints I've been voicing for years:

For anybody who's younger than 50 or 52, it takes this moment of history that we've heard about but have a limited knowledge of, and allows the audience to do what film is uniquely suited to do—experience it. There are an insane amount of books and films and plays and radio shows about those events, and the one thing I thought was missing was something that allowed me to experience that chaos first-hand.

I see movies like No End in Sight, and I have a hard time even calling them movies. I think they're essays, and they're incredibly valuable documents. But I'm happy that film didn't win an Oscar, because I just didn't feel it was cinematic. If people voted for that film, they were voting for the politics of the film. Too often in nonfiction, most of us don't take advantage of the full breadth and width of what film has to offer. I'm trying to deviate from broadcast journalism. No End in Sight is something I could just as easily watch on television.

As someone who thought Container was awesome for about forty-five minutes, I'd be mighty interested to hear what you have to say about it.

Also, goddamn do I ever want to see Chicago 10. I was hoping Kyle Smith might review it in the Post instead of Lumenick, if only becuase it might have given him an aneurysm and then we'd be rid of him. But no go.

I guess I will have to see this after you recommended My Kid Could Paint That. Holy crap that was an amazing movie.