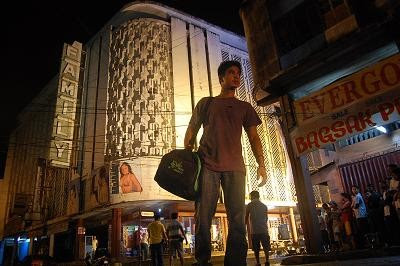 As part of my continuing effort to update this blog on at least a semi-regular basis, I'm gonna shift my "festival flashback" entries—in which I repost drive-by reviews from fest reports as the titles in question open commercially—over here, where they may perhaps incite the occasional anonymously posted insult. Sadly, these first two are almost certainly the best films that have opened in NYC so far this year, not counting stuff like Silent Light and Of Time and the City (both of which had tiny single-week releases in 2008 and are thus Skandie-eligible* for that year). I guess being at Sundance for a week or more makes one less conscious of what a total crapfest January invariably is.

Medicine for Melancholy (Barry Jenkins, USA): W/O [Toronto '08]
Phony from the outset, in ways both small (there is no possible way the cab driver could see Jo's conveniently forgotten wallet on the floor of the back seat—lamest script device of the year) and gigantic (note to pushy annoying guys: picking up a guitar and singing "Mr. Rogers' Neighborhood" will not make the girl's face light up in real life, especially if you do it when she's just asked you to leave). I was trying to cut Jenkins some slack, if only because I wanted to like these underrepresented characters...but then he took us on an extended tour of the Museum of the African Diaspora, shoving our noses in their underrepresentation, and I didn't just walk out. I kind of fled.

Serbis (Brillante Ma. Mendoza, DGPI; Phillipines/France): 40 [NYFF '08]
Not sure I can really improve on the Twitter review: "Here's an environment. Do you like my environment? Immerse yourself in the environment I offer you. That is all." Endlessly trailing members of an extended family up and down the stairs and across the waterlogged floors of the soft-core porn theater they run, which doubles as a meat market for Angeles City's gay community, Mendoza winds up going in circles; to echo Theo's complaint about Sugar, I saw no particular reason why this movie couldn't just continue forever in the same rambling yet urgent vein. Subplots are halfheartedly introduced—teen pregnancy, a bigamy suit—but you don't really get the sense that Mendoza cares much. He's more interested in the graffiti and posters that cover the walls, in the constant din of traffic that presumably serves to drown out lusty yelps. (And also, for some reason, in an ugly boil on one dude's ass.) By contrast, Mendoza's far superior Foster Child, which screened at New Directors/New Films earlier this year, remains in constant forward motion (it feels like you see half of Manila), sticks tight to an immensely sympathetic protagonist, and boasts a much more interesting project, viz. withholding any trace of melodrama from an emotionally overwhelming scenario (a professional temp mom preparing to hand a kid over to its permanent foster parents). Serbis is less strenuously doc-like and more self-consciously scuzzy, and once I knew the layout of the building well enough to sketch an accurate map, I felt like my mission here was pretty much accomplished. Cute goat, though.


* Speaking of which, remember that Guess the Skandies entries are due no later than Monday morning.
Posted by md'a at 4:55 PM