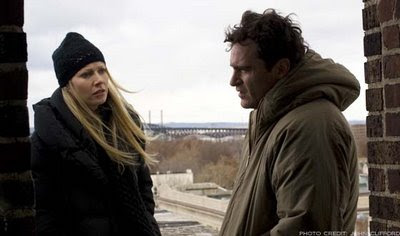 First capsule is actually an e-mail I wrote to a friend immediately after the screening.

Two Lovers (James Gray, USA): 70. [Premiered at Cannes '08, seen by me in NYC.]
It's a strange, disorienting film—much stranger than any of the Cannes reviews seem to suggest. Performances and mise-en-scène are both oddly stunted. Without being remotely "weird," it looks like almost nothing else being made right now. Kind of like Bubble if Bubble had been warm instead of cool—don't know if that makes any sense. Paltrow and Shaw both throw themselves into that same exposed-nerve realm we've seen Joaquin Phoenix in before, and Phoenix doubles down on it. Everyone seems to be maybe ten years old. But the plot is very Late Marriage, to the point of having that same Israeli actor, Moni Moshonov, in the role of the dad. (It can't be coincidence.) I found it really hypnotic, but I can see why it comes across to many as just plain inept. Frogs vindicated imo.

Gomorrah (Matteo Garrone, Italy): 54. [Premiered at Cannes '08, seen by me in NYC pre-Toronto.]
Remarkably similar to The Wire in its method, slowly and patiently assembling a vast, dizzying mosaic that examines the Camorra's effect on every aspect of Neapolitan life, as seen from every rung on the region's socioeconomic ladder. Thing is, though, The Wire, for all its undeniable brilliance, took a good five or six episodes just to get rolling in its first season, and that's twice as much time as Garrone has to work with here. Consequently, a lot of this material feels sketchy, skeletal, undernourished; of the five individual stories that eventually emerge, only one—the proud tailor who sells out to the Chinese—manages to transcend its schematic function and grab you on a visceral level, thanks largely to that actor's exceptional performance. Furthermore, Garrone's stubborn refusal to contextualize anything, while theoretically admirable, results in serious confusion for the determined tabula rasa viewer (viz. moi), who won't have the slightest clue what the hell is going on with these apparent turf wars (I had to look it up on Wikipedia afterwards), and who may not even fully understand, until the expository closing titles, how the haute-couture and waste-management strands are related to all the criminal activity, since we're never explicitly told that these are Camorra-backed businesses. Plenty of memorable images, including a housing project that rivals the one in Import Export for frightening dilapidation, but the entomological approach and general absence of humanity—no Bunk or Bubbles here—makes Gomorrah something of a grim slog. Really, the title and the first few minutes tell you everything you'll ever know.
Posted by md'a at 12:49 PM