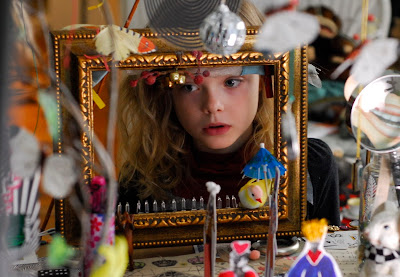 The hottest ticket at Sundance 2007 — for the increasingly desperate press, if not for the general public — was Hounddog, in which Dakota Fanning played a barefoot farm girl so desperate for tickets to see Elvis Presley that she was willing to strip naked and gyrate around à la The King, only to get brutally raped for her trouble. Many fewer journalists flocked to see this year's less sensationalistic Phoebe in Wonderland, starring Dakota's equally precocious younger sister Elle — which is a shame, since it's a much more interesting film, albeit somewhat muddled. Phoebe's dangerous obsession isn't Elvis but Alice: Her mother (Felicity Huffman) has been working for years on a Lewis Carroll dissertation, and Phoebe desperately wants the lead role in her grade school's production of Alice in Wonderland, to be directed — sort of — by a singularly bizarre new drama teacher (Patricia Clarkson). So badly does Phoebe want the part, in fact, that she devises an elaborate system of games and rituals designed to secure it for her. She paces the school hallway for hours, carefully avoiding any cracks in the floor. She hops up the stairs at her house, then hops down twice, backwards, then up again, then a half-turn, clapping, then repeat. She washes her hands again and again and again, until they bleed.

Writer-director Daniel Barnz plays a rather pointless game of keep-away with Phoebe's condition, which isn't named until the movie's final moments, but I'll respect his wishes. (I'm pretty sure it's two comorbid conditions, actually, though the script doesn't specify; if I tell you that she also shrugs her shoulders a lot and occasionally repeats other people's sentences, that should clinch it for the neuro-heads.) Barnz's goal here — quite an admirable one, in an after-school special kind of way — is to suggest that such conditions are only the extreme end of a continuum upon which we all reside. But he also wants to make a more general plea for tolerance, so we get a subplot about an effeminate little boy in Phoebe's class who wants to play the Red Queen in drag and is immediately labeled queer. And he also wants Clarkson's drama teacher to be one of those Dead Poets Society educational martyrs who encourage kids to chuck all rules and regs before being marched to the guillotine by some humorless authority figure (here, inexplicably, Campbell Scott, who can't do humorless with a gun to his head). And he also wants to beguile us with Gilliamesque fantasy sequences, at which he sucks, quite frankly. The main reason to see Phoebe in Wonderland is for yet another astonishing Fanning performance. How these little girls are able to summon such powerful reserves of fear and anguish and terror, I have no idea. I'm not really sure I want to know, to be honest.

Also opening this week in NYC but not previously addressed by me except via Twitter:

Frontier of Dawn (Philippe Garrel, France): 43
[Why go to all the trouble of creating ravishing b&w compositions if you're only gonna infect them with the empty, preening narcissism of Louis Garrel? Oh, right, because you spawned him, etc. Early scenes still fairly potent, nicely capturing the mercurial highs and lows of infatuation-as-self-regard, but Frontier pretty much flatlines when Smet does (SPOILER!), since we're then trapped with a couple of good-looking vacuums and their travails in cozy domesticity. And while I didn't find the film's subsequent shift into the quasi-supernatural remotely problematic (Orpheus being a personal favorite), Garrel's approach is so studiously uninflected that he needs an actor with depth and charisma to provide an emotional charge. Which I believe is where we came in...]

Tokyo! (Michel Gondry/Leos Carax/Bong Joon-ho, Japan): 56
[A rare omnibus film where my overall reaction is mixed not because the quality of the individual shorts varies wildly, but because all three are kinda sorta okay, flawed but intriguing. Gondry's in full-bore cute-whimsy mode, which I find largely insufferable at feature length but could tolerate here in a reasonably small dose; the idea itself is so bizarre that you can't help but shake your head in wonder. Carax is making a heavy-handed statement—albeit one that's admirably critical of Japanese xenophobia, given the nature of the project—but it's hard to feel too preached at when you're watching Denis Lavant stumbling down the street in crazy-troll regalia, muttering gibberish and licking passersby. And while Bong's segment ultimately succumbs to bathos, its details are fascinating enough to make me wish he'd expand it into a longer, grittier film about the hikikomori phenomenon, which really begs to be addressed by a sensitive, probing outsider.]

I currently don't intend to see Watchmen, if you're wondering. Read the original in comic form at the time (despite not being at all a comics person; my friend Chris tipped me off) and consider it a masterpiece; can't imagine it surviving adaptation into any other medium, and the reviews seem to confirm that it's a Fotonovel at best.
Posted by md'a at 5:00 AM

Your description of Phoebe reminds me a little bit of a good Israeli TV film from a few years ago called Slaves of the Lord. The girl in that film became obsessed with her Bat Mitzvah purification rituals.

Just saw Phoebe today. Are you ever right about Elle Fanning. I can't even imagine how it's possible to get a performance like that out of a nine year-old girl.

Question for MD'A (or anyone, really):

I'm notoriously averse to films that focus on atmosphere/"pure cinema" over narrative; among the recent Skandie winners that I couldn't stand are Silent Light, Syndromes and a Century, and Old Joy. One of my readers wrote in to ask, okay, what about the flip side: films that are great on the narrative level but fall down on aesthetics/atmosphere? The problem was that it was hard to think of examples. Any suggestions of films that work well as stories but are noticeably deficient in the qualities that make movies like Silent Light so appealing to the AVB?

Memento is my favorite film of the decade and I'd willingly concede that as cinema it's perfunctory at best. You Can Count on Me is another example that quickly leaps to mind. Terry Zwigoff isn't doing anything memorable with the camera either.

Thanks! (Especially because that's promising: I thought Memento was great, and You Can Count on Me and a second viewing of Ghost World are near the top of my to-watch list.)