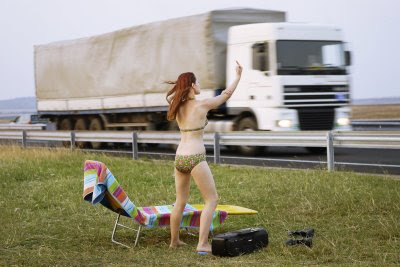 (I'll never be able to improve on the intro I wrote in 2003, so here it is again, slightly updated.)

Comes a time when a man has to say, in effect: Hey, you know the drill, and if you don't know the drill then you've been painfully remiss in your study of the drill and Remedial Drill Appreciation is probably in order. This festival takes place in New York City every spring. It is called New Directors/New Films. Its focus is new directors and the new films they have made. Most of these pictures are vaguely promising at best, who-did-the-Albanian-cultural-minister-blow-to-get-this-selected-and-where-can-I-meet-a-girl-with-that-kind-of-skill-and-enthusiasm at worst. Occasionally, however, they sneak an Old Joy or a Day Night Day Night or a Late Marriage in there, so it pays to be exhaustive, however exhausting that may be. This year, as a gesture of respect, I've decided to just ignore the (many) movies I didn't make it past reel two of, except to note in passing that the Berlin jury that awarded the Golden Bear to Claudia Llosa's The Milk of Sorrow has a much higher tolerance for zombified dolour than I do. Also, due to an administrative snafu of some kind I didn't receive word about this year's press screenings until they were already half over and so missed a number of notable films, at least a few of which I hope to catch up with at public screenings over the next couple of weeks. But I got my one keeper already, so I'm happy. What follows are not so much reviews as drive-by impressions, largely unencumbered by clarity or insight but liberally garnished with sarcasm. I am too lazy to provide context; if you want to know some basic information about these films, mosey over here. Anybody falls below a certain level I'm not permitted, listen to me, I'm not permitted to give them the premium leads. I'm trying to run an office here. Will you go to lunch. Go to lunch. Will you go to lunch.


Home (Ursula Meier, Switzerland/France/Belgium): 83.
Premiered at: Cannes 2008 (Critics Week)
[Meier is now officially one of world cinema's best-kept secrets. And yet as much as I loved her little-seen debut, Strong Shoulders, about a teenaged girl dangerously obsessed with track and field—you'll find it clinging to the bottom of my 2003 top ten list—that film's blunt, coarse naturalism in no way prepared me for the bughouse absurdism of Home, which transplants the typical French-language domestic drama into a live-action version of Frogger. Basic premise is simple: Eccentric family lives in boondocks alongside unfinished stretch of highway; highway finally opens; all hell breaks loose. But Meier finds in this apparent one-joke idea both an inexhaustible source of comic invention—the blasé insanity here sometimes rivals Charlie Kaufman at his best—and a Big Obvious Metaphor that turns out to be much thornier than it initially appears. (For best results, think house = country and cars= foreigners, although judging from her remarks in the press kit it seems as if that notion never even occurred to Meier. Doesn't matter; the film still works beautifully as xenophobic critique.) Casting Isabelle Huppert and Olivier Gourmet as mère and père was particularly inspired, as both are savvy enough to play against the ludicrousness of the material, and also automatically disarm via years of accumulated serious-art-film baggage. Finale admittedly gets a tad overemphatic, but then there wasn't any other direction to take it, really, so I'm apt to be indulgent. And while Strong Shoulders wasn't especially impressive from a formal standpoint, Meier directs the hell out of this one, mining what's essentially a single location for one perfectly composed shot after another. Nutty, inspired and cutting...but also utterly abstract, which inevitably means that the humanism-lovin' gatekeepers don't give a shit. Their loss.]

BirdWatchers (Marco Bechis, Italy/Brazil): 75
Premiered at: Venice 2008 (Competition)
[Concludes with copious text detailing the plight of the Guarani-Kaiowà, along with the requisite here's-how-you-can-help info—which comes as a huge surprise, because the film itself skirts didacticism like nobody's business. I'm generally dubious (with good cause, I'd say) about earnest white dudes who try to represent another culture in a fictional context, but Bechis pulls off a tremendous balancing act here, respecting the Guaranis' undeniable strangeness (from a white perspective) while avoiding cheap exoticism—not to mention the smug, self-conscious "humor" of something like '98 ND/NF hit Smoke Signals, which was made by actual Native Americans and yet still comes across as painfully condescending. It helps that Bechis gets fantastic performances from his non-pro Indian cast, each of whom seems fully at ease in front of the camera and yet somehow retains a certain vaguely amused distance at the same time. (Not sure if IFC plans to release this in theaters, but if so, FYC: Alicélia Batista Cabreira, Best Supporting Actress.) Only in the final stretch, when something like a narrative belatedly emerges, does it become clear that we're experiencing a carefully disguised plea for understanding; the vast majority of BirdWatchers functions as freewheeling community portrait, with a beguiling rhythm and considerable dry wit.]

We Live in Public (Ondi Timoner, USA): 59
Premiered at: Sundance 2009 (Documentary Competition, which it won)
[Undeniably fascinating, but Timoner's throughline seems awfully ad hoc. Only the title experiment really foreshadows the exhibitionism.com surge we're experiencing today, and even that was done first by Jennifer "Jennicam" Ringley, who I'm pretty sure was a much bigger Net phenomenon. (I vividly recall all the time I spent in 1996 ignoring freely available Internet porn in favor of trying to catch a fleeting glimpse of this perfectly ordinary young woman undressing; it almost seems charming now.) But Timoner had tons of footage she'd shot at Quiet a decade ago, so we spend almost half the film watching a pretty stupid conceptual-art project that has little to do with Twitter or Facebook or MySpace or really much of anything apart from the antics of a bunch of people bored enough to play guinea pig for a month. Likewise pseudo.com, which was ahead of its time but also wound up being an object lesson in precisely how Internet content was not going to work. Harris remains a fascinating figure—his Luvvy persona is almost too bizarre to believe—but the case for his uncanny prescience seems pretty weak to me, and I trust the film even less after discovering that today he's not just hangin' in Ethopia teaching basketball to little kids, as the film implies, but is in fact CEO of the African Entertainment Network, a factoid that Timoner carefully fails to mention because it doesn't fit the character arc she's manufactured. An absorbing crock.]

Can Go Through Skin (Esther Rots, The Netherlands): 57
Premiered at: Rotterdam 2009
[Virtually a one-woman show, and superb lead actress Rifka Lodeizen is ready for her many disorienting close-ups, Ms. Rots. I got unduly excited early on when it looked as if a truly startling act of violence was going to be all but ignored—or at least treated as just one notable event of many, no more or less pivotal than Marieke being dumped by her boyfriend (she's unstable from the opening seconds, well before she's attacked) or moving out to the country to renovate the big spooky house. So the film's gradual but unmistakable shift into post-traumatic psychotherapy, complete with flashbacks and fantasy sequences, was disappointing. But Rots is clearly talented, and her expert control of tone and mood in the first few reels suggests that she may eventually be capable of filling the mysteriously vacant spot where Lynne Ramsay used to reside. (What happened there?) Lodeizen, for her part, calls to mind the mercurial anguish of Samantha Morton way back in Under the Skin (ND/NF '97), which this movie resembles in more than just its title. Carine Adler subsequently vanished; I don't think for a moment that Rots will do the same. But then I wouldn't have thought that of Ramsay, either. Seriously, anyone know what happened?]

(Can't find an embeddable trailer, but you can watch one—with English subtitles, even!—here.)

The Cove (Louie Psihoyos, USA): 55
Premiered at: Sundance 2009 (Documentary Competition)
[By Psihoyos' own admission, this is unapologetic advocacy journalism, specifically engineered to spearhead a movement. And on that level it's undeniably effective, unless you're somehow left cold by the horrific sight of friendly dolphins being wantonly butchered, in which case whether or not you like this movie is the least of your problems. That's Ed, The Cove isn't much of an actual film, in the sense that it doesn't really demand 94 minutes of your time; Richard O'Barry's personal journey from Flipper's trainer to maniacal, oft-arrested free-the-dolphins activist holds your attention, but otherwise you're just kinda grimly waiting for the nightmare footage you just know they must be reserving for the last few minutes, the better to send us all straight from the theater to our checkbooks and Paypal accounts. Which is both pragmatic and in a certain sense admirable, but if you're looking for anything vaguely resembling cinema, you've come to entirely the wrong place.]

I'm with you on We Live in Public, although the portion on Quiet does capture -- almost in burlesque -- something about the excesses of the dot-com boom and the surplus of over-funded visionaries or people eager to use the new enthusiasm for cyberpunk to indulge their banal fantasies.

Home is now on my radar. Thanks.

Do try to catch Unmade Beds. I'm disappointed that it has played at both Sundance and Berlinale but is still largely unknown.