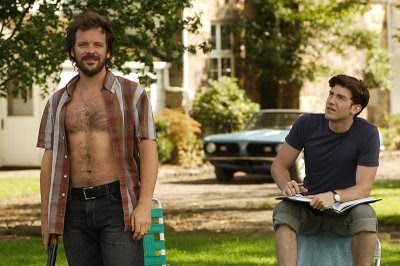 The Mysteries of Pittsburgh (Rawson Marshall Thurber, USA): 58 [Sundance '08]
[Michael Chabon's complicated first novel has been reduced (by Dodgeball's Rawson Marshall Thurber) to a simple bisexual love triangle, with two major characters—Arthur and Cleveland—melded into one, and another, the improbably named Phlox, distorted almost beyond recognition. And yet the movie still almost kinda works, mostly because Peter Sarsgaard commits himself so fully to his ludicrous bad-boy manipulator that we, like the dazed young protagonist, are completely taken in.]

ADDENDUM, 10 April: The above was filed post-Sundance as part of a very quick wrap-up report, addressing a number of lesser films I hadn't had time to tackle at greater length. So it's obviously not super helpful, in that I basically just say (1) adaptation not very faithful but (2) Sarsgaard rocks. Both of which are true, but I wish that my memory of the film, over a year later, were a bit less fuzzy, because it's getting trashed by critics to a degree that seems to me not just unwarranted but almost malicious. I can't make any great claims for this fussy, superfluous litpic, and wouldn't even really recommend it, but it's hardly the train wreck you'll see described elsewhere. Mostly it suffers from paralyzing earnestness and a very weak lead performance—though even the latter has its inadvertent strengths in context, since Art is pretty much designed as a passive receptacle. Anyway, eminently ignorable, but still thornier and less rote than the bizarrely overpraised Adventureland, to which it bears a very superficial resemblance.
Posted by md'a at 2:27 PM

Congrats on the AV Club assignment!

Haha, sorry man - people were asking who you were on AV Club - I posted a link to The Man Who Viewed Too Much. Think it may have crashed your site. Very sorry.