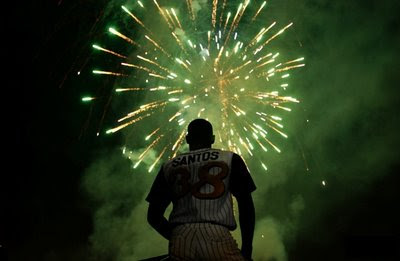 Sugar (Anna Boden & Ryan Fleck, USA): 56 [Toronto '08]
[Lots of good stuff here, but the film as a whole felt a little earnest and Sayles-y to me, especially compared to Half Nelson—overly committed to balance and fairness at the expense of dramatic juice. Still, I admired the ways in which it deliberately diverges from the journey-to-the-big-game trajectory of the traditional sports flick, and few scenarios are as reliably funny as the fish out of water.]

Gigantic (Matt Aselton, USA): W/O [Toronto '08]
[I have a noun to follow that adjective: "Quirk-o-rama." Paul Dano's mannered impotence continues to mightily annoy me, and Zooey's wide-eyed pixie shtick is finally beginning to feel a bit stale—although not even Carole Lombard in her prime could have pulled off the waiting-room scene, in which "Happy" describes the advertisement she's perusing in her magazine before abruptly leaning over and asking "Would you be interested at all in having sex with me?" Not anymore. Get a better writer and we'll talk.]

Also, I just realized I forgot to post this one when it opened two weeks ago:

Hunger (Steve McQueen, UK): 59 [NYFF '08]
[Thought McQueen was doing something amazingly daring for a while, but it turns out to be only semi-daring. Basically, the third act kind of ruins the movie for me—partly because that's the point at which it finally becomes the straightforward Bobby Sands martyrdom saga I'd feared (and also the point at which McQueen begins trafficking in symbolic cliché—I would've preferred an insert of Mel Gibson yelling "Freedooooooom!" to birds taking wing), but mostly because the last thing I wanted Hunger to do was return to a strategy of tactile overload. A conventionally unconventional political drama would devote most of its first half to discourse and rhetoric, steeping us in the ideals being fought for by the prisoners as well as the cold rationale behind the Crown's intransigence; only once we could pass a short quiz on Special Category Status—and had become intimately familiar with a cast of compelling characters—would the film mutate into an arty, nonverbal portrait of human suffering. So when the Sands/priest debate kicked off, and continued well into the next damn reel, I mistakenly thought (excitedly) that McQueen was doing precisely the opposite: first abstraction, then ideology. In fact I started to hope—rather naïvely, I admit—that he might not actually depict the hunger strike at all, that we'd experience it only via its impact on those outside the prison walls. But no, that scene—totally gripping in itself, of course; somewhere Brando and Malden are looking very sheepish—functions more like an arch's keystone, and when it's over McQueen returns to his nearly silent passion play...which, for all its formal mastery, I must say feels a bit macho in its eagerness to shove our noses into the Maze's agony and filth. Why were these men prepared to commit suicide over what was largely a matter of bureaucratic designation? There is an answer, of course, but you won't find it in this movie, which is devoted to excrement and bedsores to the exclusion of nearly everything else.]

Also opening this week in NYC is Tulpan (57), which, like Tokyo Sonata, I saw at the tail end of NYFF and consequently never did write up due to annual autumn-fest burnout. Pure ethnography isn't really my thing, so I was less bowled over than most; a lot of it seemed to pale beside Nikita Mikhalkov's fine, forgotten Close to Eden. But at least it's more overtly engaging than a somewhat similar film that I bailed on at ND/NF a few years back:

The Story of the Weeping Camel (Byambasuren Davaa & Luigi Falorni, Germany/Mongolia): W/O
[Once upon a time there was a camel who found himself the subject of a run-of-the-mill ethnographic study. For miles around, all the camel could see were magnificently barren landscapes and quotidian domestic rituals. Also other camels. Bored, the camel waited patiently for something to happen, as the title of the run-of-the-mill ethnographic study seemed to promise a narrative development of some kind. But one reel passed, and then another, and still there was nothing to occupy the camel's attention except old women boiling milk and little kids playing with goats and stolid herdsmen trading such trenchant remarks as "Looks like that colt won't be born tonight." (The piquant reply: "Maybe tomorrow, then.") The camel was pretty sure he could see stuff like this on PBS at least four nights out of seven, if only he had a television set, or electricity. And the camel wept.]

Tulpan has considerably more to offer than that, but it certainly inhabits an adjacent ballpark at the very least.
Posted by md'a at 2:32 PM

Oh, hell to the yes!