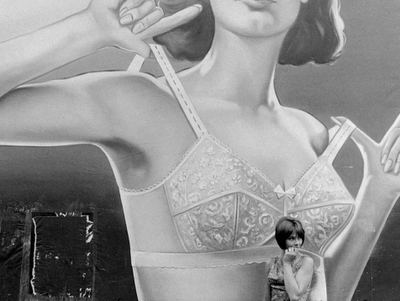 Okay, let's try this again. Top of the month. If you read these entries on a regular basis, find them in any way valuable, want to ensure that I don't get discouraged and give up, throw me a few bucks (link's at the top of my main site)—whatever you think a month's worth of near-daily capsules is worth to you. The amount is unimportant. (I suggested as little as $2; $5-10 is more common.) Knowing that a fair number of folks care whether or not I'm doing this, however, is crucial. I'm too old now and insufficiently hungry for attention to toss words out into a void.

Just skimming the Metacritic blurbs threatens to render you comatose: "104 minutes of punishment"; "visually and emotionally severe"; "courts tedium"; "ponderously slow in pace"; "threaten[s] occasionally to stultify"; "there are stretches that are, frankly, boring." So why do I find it nonstop mesmerizing, even on second viewing? Above and beyond the strange tension Reichardt derives from the sheer arduousness of even simple tasks (previously addressed in my TIFF capsule), there's a relaxed vigor to every shot that forestalls inattention, at least in my case. Other directors (most notably Van Sant) have employed the Academy ratio in recent years, but this is the first time it's seemed like more than an affectation—the boxy frame forces Reichardt to achieve certain "obvious" effects in unexpected ways, and so we get vibrant, precise compositions rather than generic vistas (plus such stunners as the dissolve that melds two radically different horizon lines). And even here, in a film notable for its fairly long takes, I find myself supremely alert to the deliberate use of contrast from one shot to the next, which in this case frequently involves a cut from blinding sunshine to darkness so nearly impenetrable that the actors can barely be seen, even when the film is properly projected. So the suggestion, made explicitly or implicitly by many folks I respect, that Meek's Cutoff is a respectable but faintly dull film that somehow "lacks juice" befuddles me on one level, even though I can see what they mean (in the sense that there's little in the way of action or high drama). I genuinely find it exciting, not worthy. Anyone who's shared more than one meal with me knows how much I hate vegetables of any kind.

More confident and assured than Fistful (which I nonetheless somehow misremembered as superior) right from the opening shot: a fantastic formalist gag that also serves to calibrate your expectations w/r/t pace (slow), rhythm (measured) and respect for human life (absent). That sly sense of humor carries over into the wary partnership between Eastwood and Van Cleef, whose first proper meeting amounts to the traditional Robin Hood archery contest with the challengers doubling as targets; The Man With Several Names proves even more mesmerizing when he's not obviously the most capable motherfucker in any given one-horse town, and it's bracing to see him actually sit down on the Old West equivalent of the curb at the climax, as eager as we are to see what happens next. Musical pocket watch device doesn't entirely work (which Leone probably recognized, as he brings it back to much greater effect three years later as Bronson's harmonica), and I'm not quite sure what to make of Indio's tortured backstory—crippling though his guilt seems to be, it has no real effect that I can discern on any of his present-tense Big Bad decisions. (I theorized at one point that he's yearning to be punished, which would be a truly unconventional dynamic for this sort of movie, but there's no indication of that whatsoever in his final scene.) As pure quasi-mythic sensation, though, this film is just breathtaking. You know you're in capable hands when even the villain's diabolical laughing fit abruptly metamorphoses from hoary cliché to a genuinely thrilling postmodern jape.

But give it some credit for continually finding new ways to be uninteresting. First two reels function as an overbearing character study in which occasional instances of complex, credible human behavior, such as the title character massaging his hugely pregnant wife's thighs, are constantly undermined by didactic nudging. It's not enough for these macho cops to engage in endless, vaguely homoerotic hugging and back-slapping—Lapid's so concerned we won't get it that he actually lays in "Hulk running"-caliber foley effects, so that a series of casual greetings at a party sound like Round 4 of Ali v. Frazier. (I wish I could believe he intended this as comedy, but the movie couldn't possibly be more dour.) Before you can get too exasperated, however, Policeman unaccountably (given its title) switches focus to an obnoxious cell of privileged would-be terrorists, thereby revealing what Carlos would have looked like without an intensely charismatic performance at its center (and minus Assayas' formal mastery). I gather we're meant to register the fundamental similarity between these two solipsistic units, but as Charlie said to Donald: "On top of that, you explore the notion that cop and criminal are really two aspects of the same person. See every cop movie ever made for other examples of this." ("The Locarno jury called it 'psychologically taut.'") And then suddenly at the end there are some cheap jabs at the mutual exploitation of the terrorists and the media, as if it belatedly occurred to Lapid that he ought to include that angle. Even the ending, while suitably arty and open to interpretation, seems fundamentally misguided, though I can't say why without getting into spoiler territory. Let's just say it comes treacherously close to equating "not an Arab" with "whoa, young and hot!"

At 45 minutes and a little change, this just squeaks over my wholly arbitrary dividing line between "short" and "feature" (which for the record is based on the Maltin Guide's stated running time for Sherlock, Jr.), so in this case "W/O" means I gave it only one reel. But that was more than enough to confirm my sense that concept > execution. Imaginary histories are by nature a pretty dry affair, and hence require considerable visual and/or verbal wit to pull off (see Greenaway's The Falls, if you can find it, for an epic example); Rivers offers mundane location footage accompanied by banal voiceover narration intoned (at least in the first two sections) by people with exceptionally poor speaking voices. Excerpts from his other work look promising, but this probably wasn't the best introduction.

Odd for a children's movie to push two completely distinct morals. The primary one—"Don't be trapped by societal expectations; you can be whatever you're determined to be"—has become so ubiquitous that it no longer makes an impression, especially when its anticlimactic visual representation involves six sheep walking in formation behind a pig. But the other—"Kindness can achieve the same results as intimidation"—packs a surprising punch...even though it, too, overestimates our (or at least my) interest in ovine crowd control. All in all, I prefer this to Pig in the City, even though Miller's sequel is far more singular and ambitious; Noonan's pastoral rhythm feels natural, unstrained, yet he still builds first-rate comic suspense from e.g. Babe and Ferdinand's raid on the Hoggett home to capture the "mechanical rooster." (Note the careful setup of the paint can on the table and subsequent punchline of a blue-spattered Babe. Miller's touch in City is far less elegant—we'd definitely have been shown the accident itself, probably at noisy, frenetic length.) Also, could this movie get made today with Miriam Margolyes and Hugo Weaving rather than Meryl Streep and Hugh Jackman? Such a pleasure not to be aurally distracted all the time. Chapter mice still annoy me, and I remain flummoxed by James Cromwell's sudden coronation—he nails the closing "That'll do," otherwise mostly just stands around looking insanely tall. But whatever it took to get him in L.A. Confidential is okay by me.

But married to what? is the question, which Godard answers via an arresting tactical bombardment of hyperbolic print ads, detached body parts and inane prattle. And yet the film, while clearly an indictment, never comes across as mean-spirited or contemptuous toward its title character, embodied by Macha Méril with a quality that I can only call sophisticated naïveté. (He did well not to cast Karina, who lacks the necessary ingenuousness.) Not surprising, really, that it wound up semi-forgotten—it's less playful and movie-mad than most of JLG's early work, more circumspect and measured with its outrage—but for my taste it achieves the ideal balance of formal audacity, pointed meta-commentary and sincere curiosity about human behavior, with emphasis (mine, not his) on the last. Even truly goofy bits, like Charlotte using a tape measure to compare her bust size with some glossy magazine's stated ideal, seem grounded in some semblance of the real world, which only serves to make Godard's self-conscious digressions—the direct-to-camera interviews, the marquee word games, the ad montages—seem even more pointed and liberating. And there's a tenderness here that's almost startling, especially since it often surfaces precisely where you'd expect ridicule. Charlotte's silent, subtitled conversation with the two teen girls discussing their fear of sex may be the most openly emotional sequence in Godard's entire oeuvre, in part because Méril makes no attempt to convey anything. (I'd wager she was never even told what Charlotte's thinking, just instructed to sit there and eavesdrop. If so, that's great direction.) Or consider the long, long scene of Charlotte and her husband listening to the album of "erotica," regarding each other in awkward silence, fidgeting and pacing, as their hi-fi plays the sound of a woman just laughing hysterically nonstop. It's unnervingly surreal and discomfitingly authentic at the same time: bold and intimate, cynical and compassionate, ridiculous and tragic. How I wish this filmmaker were still around.

Off-subject, but what's this TK (TK, 2012) business in the viewing log? Why such secrecy?

That's a unique case where I was shown a work-in-progress cut of a film that's still deep in post-production, won't be finished for months. Can't talk about it publicly. (Some of you will have a good guess about its identity, but please don't speculate here.)

At 45 minutes and a little change, this just squeaks over my wholly arbitrary dividing line between "short" and "feature" (which for the record is based on the Maltin Guide's stated running time for Sherlock, Jr.)

Actually, that might not be arbitrary. The AMPAS definition for a feature is "greater than 40 minutes". (See the definition for what gets called a short here:
http://www.oscars.org/awards/academyawards/rules/rule19.html ) That does nicely allow for Sherlock Jr. The old, cut version of The Cabinet Of Dr. Caligari, too.