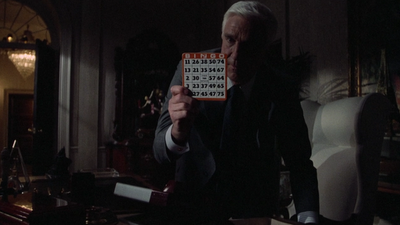 LEST YOU BE CONFUSED: Films in /brackets/ I had previously seen. The ratings are on a 100-point scale that merely signifies my personal and highly subjective degree of enthusiasm, and I use the entire damn scale, e.g. 65 is equivalent to 6.5/10, a mild thumbs-up. Anything 70+ I really liked, and 80+ is generally top ten for any given non-phenomenal year.
/Sid and Nancy/ (1986, Alex Cox): 60

Never would have guessed at the time that it'd be Oldman, not Webb, who'd go on to become a major star—he turns in a solid impersonation whereas she embodies a screeching reservoir of bottomless need, miraculously making you feel protective of someone who's all but unbearable. Thing is, though, they're both miscast, simply by virtue of being 30 (or nearly so in Oldman's case). These were just babies, still largely unformed, and there's no way an actor, however accomplished, can completely eradicate visible evidence of life experience; you can see a trace of the real Nancy Spungen every time Courtney Love appears, looking genuinely unscarred and adrift at 21. Heroic effort nonetheless, with the film gaining power as it moves away from the pro forma biopic scene-setting of the first couple reels (Lydon gets a particularly raw deal) and settles into the duo's toxic codependency. That they were also junkies inevitably means a certain amount of tiresome wheel-spinning—all drug addicts are tedious in exactly the same way; only options are bore us or lie—but Cox counters with increasing surrealism, culminating in that iconic slo-mo kiss amidst falling garbage (which I'd nominate for a place among the 25 or so greatest shots of all time). Film as a whole romanticizes its subjects and their milieu without pretending the ugliness didn't exist, which is an impressively tricky line to walk; I don't think it ultimately earns its fairy-tale wish-fulfillment ending, but Sid dancing to K.C. and the Sunshine Band with the black kids just beforehand somehow almost sells it, even if I'm not quite sure why.

Previously addressed here. I'm generally unreceptive to films about sexual masochism, but Rowe takes precisely the opposite approach from most, employing "shock cuts" from degradation to extreme tenderness and contentment; for the first time, I actually feel like I sort of understand the S&M mindset. (Though I imagine many folks in that community would insist that one need not be lonely, miserable and/or an abuse victim to find such a relationship fulfilling.) And while I was impressed anew by Del Carmen's perfectly uninflected performance, the most riveting moment this time came courtesy of Gustavo Sánchez Parra, who wordlessly conveys Arturo's sheer horror at the realization that Laura is describing a bona-fide plan, not a fantasy. Still not in love with the titular countdown, though—this wasn't a scenario that needed a tidy structure imposed upon it.

"Musketeers? Seriously? No, it's just...I really could've sworn you said Three Stooges. We were just about to shave Oliver's head. No, no, that's fine, we'll make it work somehow." A bizarre approach to classic lit, and one that I'd surely treasure if it actually made me laugh consistently. Trouble is, Lester's cast the film almost exclusively with actors who just aren't funny, some of whom apparently weren't informed that certain tonal liberties would be taken. Reed and Chamberlain have roughly the correct proportion of drollness and brio, but because the film follows Dumas père pretty closely (apart from splitting the novel into two films—I have Four Musketeers here as well, will get to it at some point, probably right after Conan the Destroyer), the title characters wind up sidelined for the entire back half of the movie, stranding us with Michael York and his perpetual expression of wide-eyed idiocy. Some scenes are handsome, earnest and functional in the standard costume-drama mode, while others would fit comfortably in Start the Revolution Without Me (a film I desperately want to revisit); action setpieces frequently straddle both approaches, to the point where many duels involve planks of wood or even wet towels rather than swords. If you described this film to me—even using my own words—it would sound delightfully bold and unconventional. Somehow, though, the actual experience of watching it was mostly frustrating and dull. Bummer.

No shortage of high drama here, yet I never got remotely involved. Maybe I've been spoiled by Margaret: Opening scene finds two siblings discovering, courtesy of their late mother's employer (the executor of her will), that their father, who they believed dead, may in fact be alive, and that they may have an unknown brother to boot. Daughter sheds silent tears. Son sits there impassively, then declares his intention of ignoring this revelation plus all Mom's wishes concerning her interment. Are we meant to be intrigued by the question of which of these reactions is the more contrived? Flashbacks kick in shortly thereafter but appear no less clunky and unidimensional than the present-day material. This was a foreign-language Oscar nominee, right? [Checks.] Biutiful, Outside the Law, In a Better World, Incendies. How the hell did Dogtooth get a slot alongside all this worthiness?

Still an audacious, pitch-black parable of denial, not the grotesquely sentimental ode to the human spirit that both partisans and detractors mistook it for; I stand by most of my epic defense of 13 years ago. But I have to admit now that Benigni seems unwilling to commit wholeheartedly to his conceit (which is almost certainly what won him multiple Oscars, so timid like a fox). Nicoletta Braschi's performance doesn't bother me as much as it apparently did at the time, but the decision to have Dora follow Guido and Giosué to the camp could scarcely be more misguided—that she's segregated from them only undermines Guido's fantasy, and every interlude involving communication between them stops the movie cold to no intelligible purpose apart from giving Braschi something to do in the second half. And then there's the German doctor, whose inevitable reappearance, though powerful in itself, writes a check that the final act not only can't cash but fails to even recognize as a conveyance for legal tender. It can't be coincidence that Guido's look of dawning horror, as he's offered not a means of escape or assistance but a pointless riddle, is immediately followed by the only visual evidence of mass murder in the entire film (stylized in a way that some found tasteless, but it's clearly intended to represent everything he's chosen to ignore prior to this moment)...and yet Guido neither snaps out of it and acknowledges the nightmare he's entered nor deliberately retreats into willful blindness. He just forges on as if those two scenes had never happened, with the finale precipitated only by the end of the war and impending liberation. These lapses aren't fatal, but they are damaging, especially given how susceptible to misinterpretation the film was in the first place. I'd perhaps be more forgiving had Benigni used his crossover success for good rather than (by all appearances; I've steered clear) unholy evil; as is, I can see his tailspin beginning right here.

Here's a genre (or subgenre, I suppose) that's deader than the Western and the Musical combined, surviving only in stuff like the Scary Movie franchise that regularly turns up on worst-of-the-year lists. (Even the two sequels to this film were pretty patchy, actually.) As ever, I tune out during the toilet humor—literal in the case of Drebin hitting the bathroom with his radio mic still on—and there are too many baseball jokes in the third act for my personal sports-apathetic taste. But it was here that ZAZ truly perfected the escalating-absurdity gag that just keeps on giving: opening-credits "cop car" that invades a women's locker room and rides a rollercoaster; the litany of subsidiary disasters that befall Nordberg after he's shot (that Simpson does nothing except take punishment is now oddly cathartic); gasoline truck --> rocket launcher -- > fireworks factory; etc. And while Leslie Nielsen rocking the deadpan is a given, I'd forgotten how deftly Priscilla Presley underplays all of her silliness -- even her recoveries from pratfalls are nonchalant. Not as inspired as the show, which had the advantage of brevity (per episode, I mean; I was heartbroken by its cancellation), but anyone who doesn't convulse at the sight of Drebin taking a pillow to the face might as well just give up on the concept of joy altogether.

Are we meant to be intrigued by the question of which of these reactions is the more contrived?

Well then it's a good thing you didn't stick around, because the climax unloads a symbolic plot twist so ludicrously contrived, it makes that scene look like something out of a Dardenne bros. movie. I won't describe it here, but if you're not planning to return to the film, I encourage you to look it up (it's pretty well spoiled in Sight & Sound review, e.g.); it's a doozy.

I should say that I still liked the film, partially because it becomes so operatically over-the-top that the melodrama counteracts the liberal chip on its shoulder.