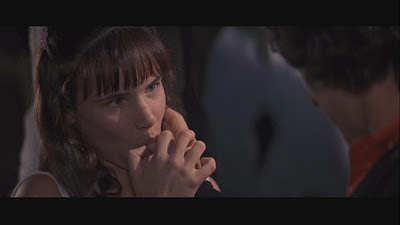 
Here's my standard top-of-the-month reminder that if you read these entries on a regular basis, find them in any way valuable, want to ensure that I don't get discouraged and give up, you should throw me a few bucks (link's at the top of the main page)—whatever you think a month's worth of near-daily capsules is worth to you. The amount is unimportant. (I suggested as little as $2; $5-10 is more common.) Just let me know you give a damn.

Fuse this stoic piledriver with Schizopolis and you'd have an outright masterpiece (and guaranteed box-office flop, but oh well): Bravura running/driving/asskicking sequences occasionally leavened by the espionage equivalent of "Generic greeting returned!" and "Imminent sustenance" rather than actual tedious expository plot bullshit. There's enough of the latter clogging Haywire's first act that I briefly thought it had lost me, but once Fassbender shows up for one of the all-time great beatdowns—normally it takes an entire wasted '70s rock band to inflict that much damage on a hotel room—the movie settles into a blissfully workmanlike groove, serving up one old-school, unspectacular setpiece after another. (That last adjective is a compliment.) Carano isn't necessarily much of an actor, but even her slight stiffness has a certain appeal in this context, and the role doesn't demand anything she can't credibly deliver; I'm also susceptible to how much her nose-crinkle makes her resemble the young Ellen Barkin on the rare occasions when she smiles. Mostly, though, she's just a superbly conditioned body in constant motion, anchoring a film that feels like a throwback without going the Good German pastiche route (though I still think that one's underrated). Hard to imagine Dobbs having much to bitch about on the commentary track this time, though it's possible that Soderbergh imposed the flashback structure on him—apart from the opportunity it affords for a nicely disorienting opening scene, not much is gained by having the entire first half take the form of an unlikely story-so-far monologue (told to a civilian, no less). David Holmes, on the other hand, will once again have good reason to bellyache when his superlative, Schifrinesque score gets totally ignored come awards season. If only the music had drowned out some of the more cumbersome dialogue. Don't expend that much effort on the MacGuffin, people. We really don't care.

Previously addressed here, though I now repudiate my assessment of its visual scheme as "purely functional"—Farhadi has an elegant, fluid sense of how to organize chaotic human behavior for maximum expressiveness, one that extends well beyond his rather obvious (but still effective) strategy of placing physical barriers (usually glass) between characters in nearly every shot. (I think it seemed less impressive to me than About Elly the first time simply because this one takes place in the city, mostly indoors; it's hard to beat the seaside for ready-made grandeur.) Second viewing turned it into a slow-motion disaster movie, as I was even more cruelly aware of various points at which the entire mess could have been happily or at least tentatively resolved, if only various people were capable of looking past the blinders of their wounded pride or crippling fear. "I find that your problem is a small one," rules the judge in the opening scene, unwittingly opening the floodgates for an escalating series of ostensibly larger problems to muddy and distract; only Termeh, the teenage daughter, seems capable of cutting through all the self-involved bullshit and seeing what's really at stake, though even she winds up compromised when forced to join the adult world prematurely. Simply one of the most heartbreaking movies I've ever seen.

Previously addressed at Cannes. Quite the backlash has since kicked in, but detractors have some confused ideas about what the film is trying (or should be trying) to do, somehow writing lengthy reviews that never mention post-traumatic stress disorder or deprogramming. Durkin doesn't employ match cuts and deliberately ambiguous visual syntax in order to draw some fatuous false equivalence between bourgeois society and a dangerous cult—he's giving us the deeply disoriented psyche of someone for whom the recent past is still bleeding into the present. It's a psychological horror film in which the horror stems less from the subjugation, rape and murder seen in flashback than from the present-tense sight of a young woman permanently losing her mooring because she can't bring herself to ask for help. (How people can see the sister and her husband as villains, or even as unsympathetic, is beyond my comprehension. Such is the kneejerk assumption that wealthy = hideous, apparently. Makes for a nice subversion of expectations, but you're not supposed to cling to it until the bitter end, especially when the bitter end strongly implies that the refusal to answer the question "What happened to you?" may get M's only family killed.) Marlene isn't some throwaway identity added to make the title scan better: Olsen is playing neither Martha nor Marcy May at the lakehouse, and if her brilliant performance registers as "opaque" it's because we never actually meet the person trapped underneath all those abortive disguises (with the possible exception of the few seconds right before she gets rechristened by Patrick, but even there I sense that Zoe's primed the pump already). So, no, the movie isn't particularly deep or plausible or character-driven, but then neither is, say, Repulsion. That Durkin creates a similar sense of nightmarish anxiety in a naturalistic context is little short of miraculous.

Reduced to its essence, Casablanca has three crucial scenes: Ilsa's arrival at Rick's, her plea for the letters of transit and subsequent surrender, and the runway finale. Two are among the greatest and most iconic examples of concentrated star power in cinema history; this is the first time I've noticed that the third doesn't really work at all. Her sudden decision to abandon Laszlo seems motivated less by passion for Rick (the happy-in-Paris flashback montage is only missing him pushing her on a swing) than by her marriage to a man so tediously noble that he can't dredge up the tiniest twinge of jealousy or concern about the nature of his wife's apparently tempestuous history with this stumpy saloon owner. Consequently, I actually found the Rick/Ilsa story less moving this time around than I did Rick trying to warn the Bulgarian newlywed away from Renault and then fixing the roulette wheel to save her. Viewed with a critical eye, the film skews a little too baldly manipulative, tossing aside logic to create false suspense (there's no sensible reason for Rick to wait until he's apparently sold Laszlo out to pull the gun on Renault, except to fool us) and leaning hard on catchphrases ("I stick my neck out for nobody" twice; "Here's looking at you, kid" three times). And yet it's still mostly magnificent, with so many great lines that even the ones nobody ever quotes kick like a mule: "I wouldn't bring up Paris if I were you, it's poor salesmanship"; "You despise me, don't you?" --> "If I gave you any thought I probably would"; "And remember, this gun is pointed straight at your heart" --> "That is my least vulnerable spot." If not quite the accidental masterpiece of enduring myth, it's certainly the most rousingly entertaining pseudo-political romantic potboiler of its era.

On the one hand, it's inspiring to see this loose collective of DIY filmmakers who all support each other and seem completely uninterested in building any sort of traditional "career"; on the other hand, so far I don't like any of the actual films, so maybe hey-let's-put-on-a-show! has its limitations. One problem is they either all think they can act or are all convinced that traditional notions of acting are a crutch (I'm not sure which—could be both, actually), so there's a lot of artless awkwardness on display, as if nobody understands that what Greta Gerwig does isn't elementary. Here, Takal seems to be attempting Shelley Duvall in 3 Women, and while she doesn't embarrass herself (which is an achievement of some sort), neither does she locate a character within the affectation, at least in the portion I saw. And the other two actors, one of whom is (needless to say) a filmmaker himself, are so thin and reedy—by which I mean their dynamic range as performers, not (just) their appearance—as to make virtually no impression. These kids work fast, and no doubt they're learning a lot, and I expect we'll see some terrific work from them down the road...unless being celebrated for their juvenilia permanently stunts their growth. Calm down, tastemakers.

Really surprised in retrospect that Scorsese allowed Max Cady to be turned into an unstoppable inhuman supervillain, even if that was all the rage at the time. (Most recent credit for screenwriter Wesley Strick: the Nightmare on Elm Street reboot.) De Niro hams it up unmercifully, substituting a sneering drawl for character; I never saw his Fearless Leader, but it could hardly be much more cartoonish. Which is a shame, because the unnatural order he's so garishly upsetting has real bite. Even if Cady is now meant to be just a projection of this family's unspoken anxieties, they deserve a richer avatar; Juliette Lewis in particular is every bit as freakishly unguarded as I remembered, her halting self-consciousness the perfect distillation of adolescent curiosity and confusion. (She's so good that she even manages to briefly settle De Niro down a bit.) Scorsese, for his part, seems to be working hard to live up to Herrmann's score, which was arguably too fervent for the '62 version (a rather modest thriller, as I recall). Yet the film works best at its most restrained, as with the monofilament tied to the teddy bear, whereas grandiose flourishes like Cady on the wall beneath a fireworks display come across as overexertion. Ultimately this seems less like a remake of a (very) minor classic than like Scorsese's game contribution to the then-burgeoning [Whatever]-From-Hell genre—it could just as easily have been The Hand That Rocks the Cradle instead, really. Once the bad guy gets set on fire and returns scarred but unfazed to wreak further havoc, any pretense of consequence is pretty much shot.

Recently noticed your (marked) backtrack on THE FRIGHTENERS. Bravo. Justifies a return look at THE GAME, maybe?

I'd be enormously surprised if I did an about-face on that one. Waiting for the inevitable Blu-ray release.