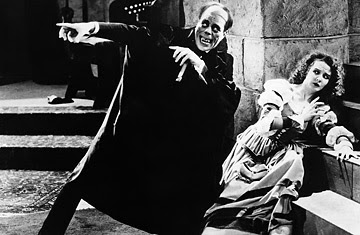 Way more gag-a-minute than I'd remembered—if you didn't know this was Eisenstein, you could easily mistake the first reel or two for a flat-out comedy, albeit one in a significantly more caustic register than the great silent clowns tended to employ. Obviously gets grimmer as it goes along, but the entire film walks a tightrope between propaganda and satire, often to disorienting effect; depictions of the ruling class as leering grotesques bump up against realistic shots of dead cats swinging from rafters, and concrete acts of political violence like the hosing of the crowd are followed by atrocities abstract enough to function as live-action editorial cartoons. (Kurtz's death has always been one of my least favorite parts of Apocalypse Now, but I see now where Coppola got the idea to cross-cut it with animal sacrifice.) Amazing to think that this was shot the same year as Potemkin, to which it functions as a sort of antic dress rehearsal. I do wish, given how much time is spent establishing the menagerie of spies, that the movie had more fun with their various animal personae—for the most part, they're completely interchangeable, and I'm pretty sure several never appear again after being introduced. But maybe that would just get in the way of the collectivism. (I'm not fatuous enough to demand a protagonist.) Also, it's easy to forget today that this was a period piece, set two decades prior (1903); contemporary filmmakers who draw laborious parallels between the past and the present should give it a close look, see how little that sort of thing will likely matter to posterity.

Exactly what you'd expect, and devoid of any hint of Scorsese's personality that I could discern. First half is by necessity more a history of the band than a portrait of Harrison as an individual; while it features some terrific archival footage I'd never seen before, it's not notably different in approach or effect than The Compleat Beatles, apart from getting very excited when George finally starts writing songs. (The only truly interesting talking-head moment is when McCartney rather offhandedly suggests that Harrison did so out of a desire for a share of the publishing royalties.) And then Part Two is hampered a bit by the unavoidable fact that Harrison's post-Beatles life just wasn't all that fascinating—admirable, yes (especially his creation of Handmade Films to finance Monty Python's movies), and certainly the polar opposite of the usual rock-star trajectory into drugs and squalor, but a bit tranquil for this sort of epic account. Even the Pattie Boyd affair gets treated by everyone involved as a non-issue, which I applaud as a pragmatist but bemoan as a voyeur. As with LENNONYC, Beatles fans will want to see it mostly for the wealth of stills, home movies and (in this case) personal correspondence—we hear several of Harrison's letters to his parents, written during the height of Beatlemania and apparently read by George himself (though it's hard to imagine why he would have put that stuff on tape, unless he specifically meant to leave it for a project just like this one)*. Also why the fuck do I not have "What Is Life" in my iTunes library? Must remedy.

* Chris Stults, who paid closer attention to the end credits than I did, informs me that the letters were in fact read by Harrison's son, Dhani. Which makes perfect sense. Man their voices are similar.

Ah, Ms. Sciamma. We meet again. I see you're still rocking the whole uninspired-but-sensitive competence thing. Might I suggest that it's not enough merely to place a young girl in an emotionally volatile scenario and then avoid doing anything crass or hamhanded? You make precisely the sort of film that I always get funny looks for bailing on: understated and compassionate, with a protagonist whose inchoate longing strikes a chord with anyone who's ever been a child. All that's missing is a single solitary idea or image or fleeting moment that I haven't seen in 87 movies just like it. (I counted! #didnotcount) Your heart is clearly in the right place, but you need to ask yourself what you have to offer that could only come from you, and then fashion something from that. You think you're the only director that can give me that Céline Sciamma feeling? I got 20 directors under contract I can ask for a Sciamma-type thing from! Now get lost. There's a war on.

Previously addressed at Cannes. As much as I admire Malick's universe-spanning ambition, and thrilled again to the creation interlude, this really works best for me as a completely random memory play, unencumbered not just by narrative but by any dramaturgical notion of "conflict." The more Pitt's taskmaster dad becomes the film's emotional fulcrum, the more I disengage, whereas ostensibly mundane stretches of everyday life often have me on the brink of tears. Reflection of wiggling hands in a bucket of water; tree frog climbing a stack of grass that bends beneath its weight; quick glimpse of the kids in Halloween costumes; Mom reading Beatrix Potter at bedtime; "That's where God lives" (which would normally make me gag but accompanied by Smetana's "Vltava" and Chastain spinning truly seems religious); garden hose; sparklers; a shot of Mom bending over to kiss one of the sleeping boys in which the angle of her body suggests utter devotion—I don't know that a feature-length movie could sustain that level of suburban iconography, but I would have liked to have seen Malick try. (If there must be drama, the bit where Jack shoots his brother's finger with the air rifle and then apologizes with a fan, kisses, and an offer to get decked by a 2x4 is more my speed than all the filial angst, which I'm sure is true to Malick's experience but nonetheless feels overly familiar.) And with due respect to those who've valiantly defended it, the ending still seems unbearably kitschy no matter what interpretation one favors. Maybe that's the inevitable flipside of unbearably moving.

Massive letdown, despite the high rating. (I'd anticipated 99 or 100, as I once included this on a list of my 20 favorite films of all time.) Structurally it's still magnificent, with the opening surveillance sequence functioning like an overture whose multiple themes subsequently recur in varying combinations—I don't think more than a few minutes ever elapse without our hearing snippets of it, often as aural wallpaper. Furthermore, Hackman is still great, the post-convention workshop party remains a tour de force (there's a cut from a wide shot of Harry and the woman wandering that cavernous empty back room to an equally wide shot of Harry alone that took my breath away), and the ending, while perhaps a bit pat in its irony, nonetheless shredded my soul yet again. But I found myself cringing repeatedly this time at how bluntly Coppola presents Harry's paranoia, and newly aware of how little there is to the man apart from being paranoid. Teri Garr's arm's-length girlfriend exists only to provide clumsy exposition, improbably dumping Harry the instant her function has been exhausted; John Cazale defects to the competition the same day, suddenly pissed off that he hasn't been trusted with sensitive information about the jobs they do. That these crises happen concurrently with Harry's fear for the safety of the couple he bugged, even though both relationships are clearly long-term and Harry's obviously been sealed off since the womb, makes the film feel thin and schematic...as does the backstory about the job Harry regrets, which actually finds him muttering "I can't let it happen again" even as he's being boned. And I apparently repressed all memory of the Fogtown dream sequence, which is just plain embarrassing. All in all, it feels like a slightly bloated adaptation of a perfect short story, masterful but straining too hard for weight. I still like it way better than The Godfather, Part II, though.

Stunningly rudderless even by biopic standards—but that's perhaps to be expected, given that we're talking about arguably the most fiercely guarded private life of any public figure. Dustin Lance Black's connect-the-dots screenplay for Milk was no great shakes, but at least he had a bunch of dots to connect; nobody really knows what Hoover got up to in private, so Black and Eastwood are forced to engage in timid speculation, none of which feels remotely plausible. Clyde Tolson, in particular, is portrayed by Armie Hammer as little more than a warm smile for most of the movie, so that the scene where he finally plants one on Hoover (and gets rebuffed in a way that suggests it had never happened before) only makes you wonder what exactly we're meant to believe. Were both men happily celibate throughout most of their lives, sublimating their feelings for each other into companionship? If so, why not explore such an unusual dynamic? Instead, J. Edgar struggles to find superficial parallels between Hoover's personal anguish and his professional ambition, hoping we won't notice that the former tends to vanish entirely during obligatory stretches devoted to e.g. the Lindbergh kidnapping. (Not that I'm complaining, as those stretches tend to be the film's most compelling. I'd have preferred a procedural about the birth of the F.B.I., with Hoover just one player of many.) DiCaprio doesn't embarrass himself but never disappears into the role, and must battle (alongside Hammer and Watts) some of the shoddiest old-age makeup I've seen in years; Eastwood, as usual, seems committed to a purely functional visual translation of the script, as well as the notion that dimming the lights will make any shot more dramatic. More dull than risible, though the sole allusion to (largely discredited) cross-dressing rumors, with its Freudian literalization of the "mama's boy," inspired a mighty eyeroll.

Believe it or not, my first encounter with this chestnut in any form, unless you count the funereal opening notes of Andrew Lloyd Webber's score (which I confess to humming at a couple of key moments—it's really perfect). Not a whole lot to the story, is there? I had a general sense of what to expect, via pop-culture osmosis, but I thought the actual movie would flesh it out a bit, involve some serious demon-wrestling. Chaney's makeup still has the power to repulse, but he doesn't exactly give what you'd call a performance; any sense of tortured longing derives from the intertitles, making it easy to be distracted by the film's stupendous set design. (Reconstruct the catacombs, put in some slow-moving fake gondolas, and you'd have a fantastic Disneyland attraction combining the best elements of the Haunted Mansion and Pirates of the Caribbean.) And when we're above ground, it's like sitting through the romance scenes in the Marx Brothers pictures. Still, great spectacle can be its own reward, and bits and pieces throughout pack an atavistic punch; when Erik wades into the lagoon to hunt Philippe, it's easy to think of him as monstrous in a sense entirely separate from "deformed." (And maybe I'm wrong about Chaney not giving a performance, despite the makeup and the mask—he definitely conveys something in his carriage.) Leroux's original ending has been radically altered, judging from the Wiki-synopsis, but I gotta say I kinda dig Erik's sad little fakeout just before the mob devours him. He gets the last laugh, somehow.