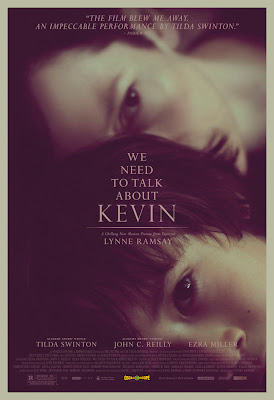 * It took 53 points to make the cut in 2010. Because of the extraordinary consensus up at the top, it was easier than usual for a handful of ardent fans to make a difference this year. Coming up in a couple of days is a film that placed on the strength of just two votes—one person who thought it the best of the year and another who had it at #2 was all that was required.

*** Edging out two actors from the same film—the same film as each other, that is; not J. Edgar—who received five votes each.

HISTORY: Porterfield failed to place for the barely-released Hamilton.

Gotta be Spacey and Irons (or more probably Irons and Spacey) at #21 and 22. I almost gave Irons points myself, but the amount of fun an actor seems to be having shouldn't really be the yardstick for judging his performance.

Also, props to Atli for a 100% record (so far). Will it be THE INTERRUPTERS tomorrow?

Ah, I think I have a strong hint, then, about your upcoming two-voter film. Peeps: You have to throw around those 30s for the movies you love.

As point of comparison, would you be willing to reveal number of points #1 received this year vs. last year?

I don't think Irons is just having fun. Or rather, while he clearly is, it's compatible with who his character is. The kind of man so secure that he can afford to be insouciant and "cheeky" to others, and be upfront about his ignorance and its irrelevance to his power. It's certainly a far more interesting character choice for a tycoon than what Oliver Stone might have directed out of him.

I gave Irons points. (Spacey too.)

I guess I have to watch PUTTY HILL now grumble grumble.

I account for 14 of those KEVIN points, and I continue to think the film is underappreciated mostly for people not having seen it. (Even though it does have 30 votes in crixpix... but TREE OF LIFE has 50).

It's such an assuredly directed film, and has stuck with me as a visceral experience more than pretty much everything I saw in 2011 outside of SHAME.

Color me shocked that the MARGIN CALL script is down this low. I gave it 17 points -- tied with one other film for my top screenplay. How were there 19 better-written movies?

I thought KEVIN was swell up until the script kicked in.

(Mike: My #2 film? Because if there's anything that looks bespoke for my tastes, I'd figure that would be it. My #3, now, I can see the surprise.)

Right, it was your #3. (I was going from votes in Picture, which are scattered. Can't actually see the lists yet.) Can I just say what this was, since it's not as if anyone expects it to show up in the top 20 or anything? It was Brighton Rock. Which I did not see, and given my love for the '47 version could theoretically imagine being terrific, but boy did nobody in our circle concur, nor American critics in general.

Brighton Rock, to my amazement, turned out to be a sort of Brit noir Breaking the Waves. The book's not like that at all. (The '47 film, as I've just found out this morning through YouTube clips, is a little like that, but the staging seems off compared to the remake. I need to see the whole thing, though.)