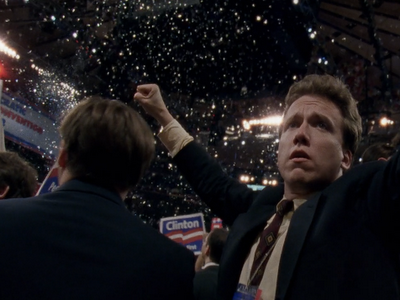 Arguably more interesting now than it was at the time, since it functions as a time capsule in addition to an intimate behind-the-scenes portrait of a campaign. Emphasis is entirely on manipulating the mass media, with virtually zero effort made to target voters directly (what are they gonna do, mail physical objects to their homes?); the team's jubilation about Brazilian TV footage showing that Bush's re-election committee had its flyers and such manufactured overseas, for example, quickly dissipates once the networks do some fact-checking and decide the story isn't as juicy as it first appeared. Gotta wonder how that might play out today. As I remembered, though, this is basically The James Carville Show, as well it should be given his endlessly entertaining amalgam of folksy + ornery—I especially love the concession speech he extemporizes early on Election Day, as they await the first returns, which sounds exactly like what the loser always actually says even though Carville sarcastically laughs his way through the whole thing. Stephanopoulos, for his part, mostly looks junior-exec eager, but he does have one mildly startling moment in which he skates right up to the edge of offering political favors to a journalist for burying a Clinton rumor, seeming to realize at the last second that he's on-camera and abruptly pulling a Nixonian "That would be wrong." Such awareness makes me skeptical of fly-on-the-wall docs as a rule, but in this case it really does appear as if we're getting a fairly accurate sense of how the sausage is made (in rooms with lots of flies on the wall, I'm guessing; no it's not mixed, so there!), to the point where the film would be no less valuable a document even if Clinton had lost the election, or the nomination. If anything, it seems a tad skimpy at 96 minutes, skipping past Buchanan and the culture war, Sister Souljah, "I didn't inhale," etc. Sign visible in the background of several shots that ought to have been passed along to Al Gore: "If we buy it, we will win. FLORIDA."

I just can't watch this kind of rapid-fire, heavily expository, multi-talking-head documentary anymore, even about a subject I know and love. Tirola often cuts to someone speaking literally one sentence, so that you barely even have time to register who it is, or wonder what they're doing in the movie (Doris Kearns Goodwin? Evander Holyfield?); he clearly just interviewed every person he could think of, worked out the story he wanted to tell, and then went through the footage splicing in sound bites as if they were pieces in a jigsaw puzzle. Excruciating. Doesn't help that he structures it all around Chris Moneymaker, who's only interesting for what he represents (the dream that you, an amateur, could win millions with a tiny investment), or that the landscape has radically changed since this movie originally premiered three years ago (acknowledged via a new prologue shot after Black Friday, plus no doubt newly shot material at the very end). But seriously, who wants to watch this kind of doc anymore? Is there still an audience? Just pick Phil Laak or Gus Hansen or some other charismatic pro and follow him around.

Randomized queue decreed that the time had finally come to get this Best Picture nominee + Cannes Competition title out of the way. Knew it was hopeless, though, as I acted in the play in high school (as Otto Frank) and disliked it even then, Pulitzer notwithstanding. Sure enough, the film has the same monotonous rhythm, alternating bland scenes of cabin-fever bickering with repetitive "suspenseful" interludes in which the Annex's inhabitants are threatened with discovery; the knowledge that it actually happened can only ennoble Goodrich and Hackett's turgid sense of drama (they were comic writers at heart) so much. But I was unprepared for the sheer awfulness of Millie Perkins, who captures none of Anne's restless intelligence and is distractingly "adorable" (especially when whining about how homely she supposedly is—they might as well have gone whole hog and cast Audrey Hepburn in the role). Stevens works hard to make this single-room production cinematic, and he does achieve one genuinely stunning effect: Anne and Peter's first kiss, which occurs in deep silhouette, after which Anne opens the door and light suddenly floods her astonished face. (A rare nice moment from Perkins, too, who seems well suited for less harrowing tales of young love.) Really, the whole idea of a dramatic work based on Anne's diary is deeply misguided, except insofar as it gives audiences an opportunity to sadly shake their heads. Barring wall-to-wall voiceover, all you've got, in lieu of a remarkable young woman's frustrated self-examination, is a bunch of people cooped up in a tiny space for a couple of years, getting on each other's nerves. For an equally tiresome current film saddled with pretty much the exact same problem, see, or rather do not see, The Forgiveness of Blood. Also, did I mention that this thing is three hours long? THREE. HOURS. LONG.

One of those comedies in which the setup devours half the film's running time, without being especially funny or (in this case) cuttingly satirical for its own sake. Once Jack Benny starts impersonating Nazis, it's a hoot...yet even in the back half, there's a curious remoteness, as if everyone involved was too aware of the scenario's real-world ugliness to truly cut loose. You know the story about the line of dialogue that got cut in the initial release because of Lombard's death—something along the lines of "What could happen in a plane?" In a way, the entire movie feels like it's walking on those sort of eggshells. As if it's been slightly defanged, even as it dares to mock Hitler and so forth. (And even the mocking sometimes verges on a proto-"Hogan's Heroes," especially w/r/t Sig Ruman's Col. Ehrhardt.) Cherishable mostly because it's one of Benny's only leading roles in the movies, along with Charley's Aunt (which I've never seen); he more or less pioneered the persona of the self-regarding schlemiel, and nobody's ever matched his impeccable sense of timing, which amounts to a series of exclusively vocal double-takes. Lombard isn't given nearly as much to do here, being stuck opposite the young Robert Stack in most of her scenes, but still manages to get laughs in unexpected ways—one of her scripted lines is "Lieutenant, this is the first time I've ever met a man who could drop three tons of dynamite in two minutes," which she delivers in a sort of dreamy rapture and then beautifully punctures with a breezy "Bye!" Good fun, but I'd rank it alongside lesser-heralded Lubitsches like Monte Carlo and Cluny Brown rather than all-time greats like Shop Around the Corner and Trouble in Paradise.

Reviewed in brief for Las Vegas Weekly. Way better than I expected—the first half-hour or so really crackles, and Dano's recessive nature seems to be working for him rather than against him for a change. But the movie I wanted it to be would feature this exchange at about the midpoint (where it starts to go wrong):

Paul Dano: Do you think I'm like my father?
Olivia Thirlby: I think you need to be slapped for asking something that retarded.
[Slaps him hard in the face, exits.]

Original title translates roughly as Stories That Exist Only When Remembered, which is way more evocative than either Found Memories or what I saw of the film itself. Murat spends 20 minutes just establishing that Every Day Is Much The Same in this sleepy village forgotten by time, shooting various mundane activities repeatedly from different angles à la The Turin Horse. (I didn't love the studied repetition there, either, but at least Tarr conveys an overwhelming sense of the world's indifference, as opposed to mere banality.) Things ostensibly perk up with The Arrival Of An Outsider in the form of a young photographer, but the film remains stubbornly low-key to the point of somnolence, and I just never got involved. Though that original title suggests that involvement only arrives in retrospect...