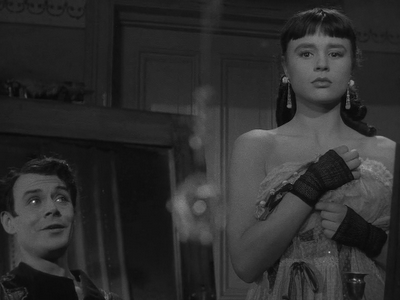 Previously reviewed at reasonably decent length for Time Out New York, right after it swept the NYFCC awards (without my help; I didn't become a member until the following year) and before a considerable backlash set in. My sense is that a lot of folks have turned on this movie, especially since it now sort of looks like a proto-Crash; if we revoted the 2000 Skandies Best Picture race today, I strongly suspect it would drop from 5th out of the top 20 altogether. (No Soderbergh film has placed since.) But while its treatment of the drug war is unquestionably shallow, and its rhythms essentially televisual, Traffic crackles and growls and sparks in a way that precious few issue-oriented dramas can match. I'd happily watch a six-hour version...which might have allowed Zeta-Jones' story arc to seem less contrived, and could theoretically have facilitated a single change that would have solved the film's primary glibness problem: splitting "new drug czar" and "teen addict" into two separate narratives. As is, plays like a fantastic pilot forced to engineer a hasty finale.

Sucker-punched me in right from the opening credits, each of which appears in the empty space vacated by Guy Pearce's head after a hulk (named Rupert) knocks it sideways during an interrogation. For a while, this has the turbo-charged sense of its own ludicrousness that others seem to enjoy in Neveldine/Taylor joints—an abdication of reality that's enhanced, not violated, by the shoddy greenscreen effects. And Pearce makes the best sarcastic, can't-be-bothered action antihero in ages, more than compensating for Maggie Grace's usual vacuity. (I was so happy when "Lost" killed Shannon off.) That archetype went all but extinct decades ago, after multiple Die Hard clones beat it into the ground, and I hadn't realized until now how much I missed it; even when the hard-boiled banter feels a tad musty, there's a nostalgic kick to it. Inevitably, perhaps, Lockout settles down to become a more conventional genre flick, at which point Pearce's quips lose some of their zing and the skeletal nature of the enterprise (in which a prison riot involving 500 cons is somehow managed entirely by two Scotsmen, with no apparent challenges to their authority) seems less charming and more chintzy. But I still feel like it partially recaptures something that got lost when digital effects became an event movie's raison d'être—namely, the memory of a time when not every picture involving guns and villains and danger needed to be an ostentatious, four-quadrant "event." When Pearce commandeers some sort of futuristic Batcycle, the movie hilariously doesn't even bother to "establish" it—he's just suddenly zooming down the highway at 200mph, looking like an avatar in a cheap video game. Rides it straight into a subway station, gets dislodged, slides at breakneck speed toward the path of an oncoming train—a single shot designed not to impress with its photorealism but to tickle with its crazy audacity. Worked on me.

Not all that terrible for a movie that got MST3K'd (season nine). Its secret weapon is Michel Ray as the main kid—name's a tipoff that he's not American-born, and he does have a very slight accent that Crow or somebody keeps calling Flemish. (Best riff, at a particularly dramatic juncture: "I saw nothing like this in Antwerp!") But it's clear why they cast him anyway: He's got an amazing 1000-yard stare, ideal for a story about alien mind control. That it's benevolent, anti-nuclear mind control means the film is never remotely scary (and is often super-didactic), but it does at least manage a sporadic creepiness, bolstered by the coincidence that most of the adult supporting cast—i.e., the victims—would go on to TV fame: You've got the Professor from "Gilligan's Island," Uncle Fester from "The Addams Family," and Mr. Drysdale from "The Beverly Hillbillies." (As a bonus for cinephiles, the kid's aw-shucks dad is played by one of James Mason's goons in North by Northwest, looking no less menacing here.) And maybe it's just because I read A Wrinkle in Time over and over as a kid, but I was unnerved despite myself by the alien, which most reviews describe simply as a mass of protoplasm but is clearly meant to resemble a disembodied brain à la IT. Those frissons aside, it's not so much laughable as just bland...but I'm still grateful to Olive Films for putting out films like this on Blu-ray. A steady diet of classics can feel oppressive.

Not hard to see why folks compare this to The Girlfriend Experience, but Soderbergh managed to fragment that one so that its essentially trite narrative was difficult to discern. Here, the platitudes and conservatism loom larger and larger as the film progresses, ultimately swamping any lingering curiosity about the milieu or any (mostly ostensible) focus on economics. (Mike being turned down for a small-business loan due to bad credit seems more like a pity party than like the complex negotiations navigated by Sasha Grey's Chelsea, which were inextricably tied to her chosen profession. Mike's just trying to get out, in the hackneyed tradition of a gazillion working-class protags.) Tatum really does work magic onstage as the title character, and it's certainly refreshing to see a Hollywood movie in which male bodies are unapologetic objects of desire; at my midnight screening, much of the dialogue got drowned out by delighted cheers from the 80% female audience. But his insipid romance with superpouty Cody Horn (driven by painfully awkward improvisations that just make Lynn Shelton look like even more of a genius) and penchant for threesomes with Olivia Munn seem like sops to the guys who'll get dragged along. Then drugs get introduced in the most cheesily ominous way imaginable and it's just a matter of awaiting the dreary repercussions. Also, structurally, Alex Pettyfer's initiate should be (and at first appears to be) the protagonist, but the guy never develops even a smidgen of a personality, ultimately seems on hand solely to provide Mike with a love interest in act two and a fresh obstacle in act three. I found myself thinking of Boogie Nights—another movie I like less than most people (though a lot more than this)—which similarly pretends for a while to celebrate what it secretly finds distasteful. Which means Matthew McConaughey will eventually become Burt Reynolds. Which sounds about right, actually.

Every time I see this I forget that it doesn't involve any actual physical steps (as the novel apparently does)—could have been called The 39 Tubas, really. A sensational entertainment by any name, establishing the template for the innocent-man thriller and out-pizzazzing most of its successors...though Donat is so completely unruffled throughout that it sometimes feels oddly low-key. Like North by Northwest, its pleasures are surface-level, devoid of any emotional core; in both cases, I'm having way too much fun to perceive that as a defect. Plus there's just no time. In your average thriller, it's a fairly big deal when the hero gets shot at point-blank range and apparently killed—even though you know he can't be dead, it's fair to expect a certain amount of build-up to the revelation of how he survives. Hitch not only cuts immediately to an expository flashback (here's how), but then jumps ahead to find Donat already safe at the police station, skipping right past the shooting's aftermath—all the better to catch us off-guard yet again when the law is revealed as a very smooth liar. (One plot hole that slightly bugs me, though: When the bad guys kill the foreign-accented lady spy who's sleeping in Donat's apartment, why don't they just kill the sleeping Donat as well? They clearly want him dead, as they're hanging around outside waiting for him.) And if sparks don't exactly fly between Donat and Carroll, their dynamic is still sublimely combative, with the latter's antipathy rooted not in glib neurosis but in the rational assumption that total strangers pursued by cops and telling fantastic stories aren't to be trusted on faith. That the film ends as it does, rather than on a traditional clinch, is sheer perfection.

Checking my records, I find this was the first "old" Bergman film I ever saw (preceded only by the initial theatrical run of 1984's After the Rehearsal—not the best introduction), and pending any future reassessments I still prefer it to most of his canonical masterworks. Everyone's miserable but they're not yet so floridly articulate about it, and there's a truly fascinating mix of performance styles, from Annika Tretow's pragmatic naturalism as Alma (a role model for independent women if there ever was one) to Hasse Ekman's nakedly expressionistic leering. That range befits a portrait of professional entertainers who yearn for escape from their dreary life of providing others with (meager) escape; Bergman lets the circus and theater folk be melodramatic for effect but keeps the actual emotions life-size, acknowledging that what we're seeing is just one final, feeble spasm of rebellion preceding total resignation. It's a bleak vision but not without warmth and tenderness, unmarred by the grandiose nihilism that plagues many of Bergman's later films. One big problem, though: The film peaks both emotionally and formally right at the outset, with the extraordinary flashback account of Alma bathing nude with the soldiers and then being rescued by her husband in full clown makeup. Alternating between jaunty music, mocking laughter, martial drums and complete silence, and sustaining the arduous journey back to the tent (as Frost awkwardly carries Alma parallel to his body in an effort to hide as much of her nakedness as possible) until you long to avert your eyes, it's such a beautifully choreographed heartwrecker that the rest of the film, fine though it is, comes across a bit like an extended afterthought.

Jim Henson was a genius but he had a limited range—his Saturday Night Live sketches were almost painfully unfunny, and this attempt at straightforward mythmaking pretty much flatlines apart from its typically impressive creature effects. That it was a box-office hit surprises me, frankly, as it's seemingly too dark and grim for small children but unquestionably too earnest and simplistic for adults (or at least for the guy who gave up early on Winnie the Pooh). Jen the Gelfling makes Luke Skywalker seem like Camus' Mersault by comparison, and humanoid puppets weren't a terrific idea to begin with; the kid desperately needed some personality to offset his frozen face, but he's just a tedious paragon of noble innocence, forever doing the right thing. Which is doubly disappointing given that the movie's one semi-original conceit has the Mystics and the Skeksis turn out to be oppositional halves of the same beings, which suggests a mix of good and evil in everybody—a dichotomy that's never actually explored. The Skeksis themselves are sometimes fun to watch (as are the Garthim, which look like gigantic boll weevils; love the way they collapse in segments), and I do give Henson credit for taking such a monumental risk at this point in his career: depicting what amounts to slavery and torture, and apparently killing off allegedly sympathetic characters (though he cheats and lets them all survive in the end). It's a brave and ambitious effort, just not a very successful one. I'd much rather watch Henson and Oz riff, honestly.

I also found myself comparing Magic Mike to Boogie Nights on the way out of the theater, but your McConaughey == Reynolds just blew my mind.