(For those unfamiliar with the Skandies, my annual survey o' cinema, now in its (gack) 18th year, you can find the procedural-historical lowdown here and results from previous years over yonder.)

Here, then, are the group's estimation of the best films that premiered during 2010 but failed to secure New York distribution (and hence eligibility for the Skandies proper, which has a two-year window) by the end of 2012. I used to unveil these simultaneously with the main top 20, but it occurred to me a few years back that they really ought to have their own separate platform, given their undeserved semi-obscurity. (However, they're butting right up against the main survey this year, because I happened to suffer a week-long kidney stone attack just as I was planning to assemble this post. Then got caught up in holiday/year-end madness.)

As it happens, fewer and fewer notable films—where "notable" is defined as "made some noise on the fest circuit and were likely to be seen by several voters"—are failing to secure a week-long NYC run. This year we finally hit what I consider a tipping point: Five people who usually vote in this section (out of a pool of only 17) chose to abstain, saying they just hadn't seen enough eligible titles. As a result, a number of films would have cracked the top 20 on the basis of a single vote. So I've whittled the list down to just a top 10. It's a good thing, really—in a perfect world, there'd be no need for this category, and we're getting remarkably close. 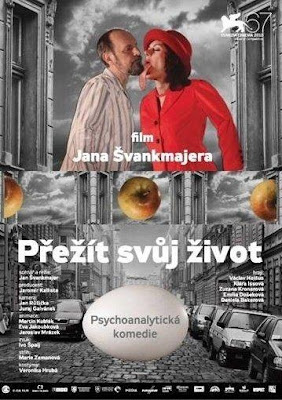 "Svankmajer seems to have a grumpy side and what is his problem with beauty...so many of the characters in his films are ugly! Alice was more pleasant in that despite the grotesqueness of all the other characters in the film, the protagonist was pretty. I know, it's not what his work is supposed to be about, but hey...all the same!"
#9 In the Shadows (Thomas Arslan) 38 pts | 3 votes 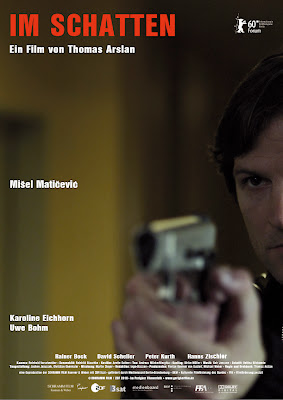 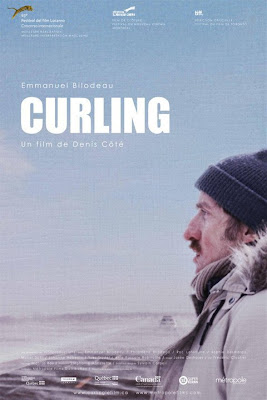 "My gripes with Curling are slim to none, but that's not to say I really enjoyed it. It's a strange film that possesses a strength which rewards the inquisitive thinker. Just a heads up: Be careful to whom you recommend this; even though the film has a similar tone to other bizarre flicks (like Dogtooth, for instance), I would say it's even less accessible. If you don't like films that urge you to clue things together, then I'd say go ahead and skip this."
#7 Brownian Movement (Nanouk Leopold) 47 pts | 4 votes 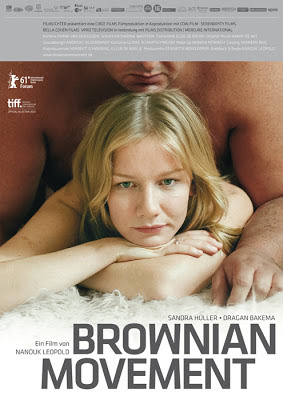 "I had no idea what this movie would be about. But it played at the Berlin International Film Festival this year and the title sounded intriguing. Plus it did fit into my schedule. It really goes all the way and is pretty harsh and raw. While you never really get into the head of our main actress, she seems to bear it all [sic?]. So this isn't for the delicate viewers amongst us."
#6 I Wish I Knew (Jia Zhang-ke) 48 pts | 6 votes 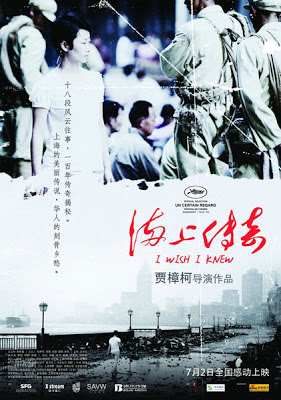 "Unfortunately, this film in no way gives a person watching it the impression that Shanghai is one of the most powerful cities in the world. There was scarcely a mention of Japanese occupation. Instead, we are subjected to no less than eighteen people sitting around and recounting their memories, more of their family lives than of Shanghai itself. For the most part, these people's memories were mundane and tedious. Then there was the young woman wandering around The Bund, or walking in the rain – why? Who knows, as it's never explained? Granted, things don't have to be spelled out in black and white, but for the life of me, I couldn't see the point."
#5 Guest (José Luis Guerín) 49 pts | 4 votes 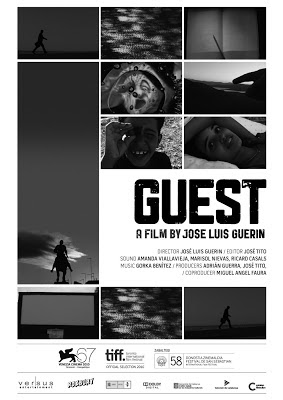 "The film started well, without any particular intention or purpose, capturing life, in life. But then the filmmaker acquired a purpose, and went looking for certain things, tried to film certain things to the exclusion of others, and lost objectivity (objectivity has nothing to do with whether something is fiction or nonfiction)—which could be seen in how his subjects acted toward him, as if they were performing more and more. There was almost an expression of disbelief on their faces—the cardinal sin in documentary-making."
#4 Black Venus (Abdellatif Kechiche) 50 pts | 4 votes 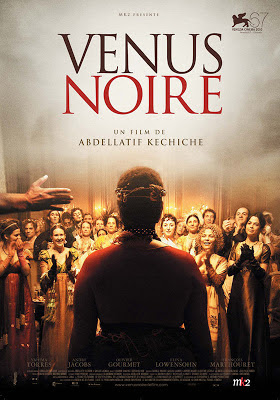 "As flawed as this movie may have been, at the end of the day it was a step forward in black film (if there even is such a thing). For once I didn't have to sit through a movie about: the first black athlete to slam dunk a basketball at an Ivy League school; a single teen mother in the ghetto (yes I'm taking a stab at Precious and the hundred other movies to focus on that); an aspiring rapping pimp (Hustle & Flow); a black sidekick that has some stupid loyalty to the white main character (a role kept alive by Morgan Freeman and Whoopi Goldberg); or a biography about a predictable civil rights leader."
#3 Promises Written in Water (Vincent Gallo) 74 pts | 4 votes 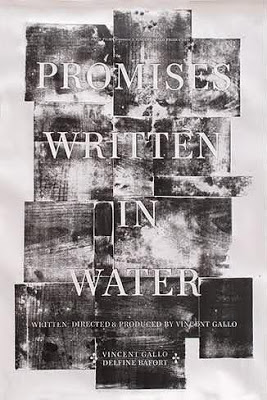 "Gallo's newest film is extremely radical and complex and its story is told in a subtle manner way outside of the convention of the mainstream. The film's vocabulary is stunningly sophisticated and those who choose to describe the film in standard film-review terms are insulting cinema and insulting themselves. Since Promises Written in Water does not follow a program which is comfortable for lazy mainstream writers, they must lash out against Gallo and they do so most often more personally than in regards to his work. Still Gallo continues to grown creatively and Promises Written in Water reveals the work of an very important high-level filmmaker at the top of his game. The film is simply beautiful. If your lens for watching films is stuck in past references or your expectations are standardized then I suggest you avoid this film. Personally I am grateful that a great filmmaker like Vincent Gallo can still exist in this world." [Please let this be Gallo himself.]
#2 The City Below (Christoph Hochhäusler) 80 pts | 5 votes 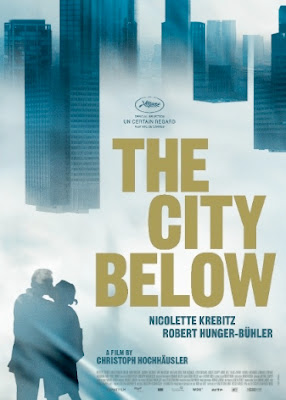 "In the end, The City Below is showing us something much more problematic, and much more exciting, than postmodern ennui. We know that men like Roland Cordes exist, and that women like Svenja Steve mindlessly orbit them, and that these people make life difficult, if not unbearable, for the vast majority of us. But these two disintegrating characters eventually drift away from privilege. They are not revolutionaries—they are not focused or even present enough to reflect on their own position—but their position of privilege, their class, is gradually being disarticulated. This mental disarray, the vague but ineluctable knowledge that things are no longer making sense as perhaps they once did, is a vital "task," if we can call something so unconscious a task. It is probably best described as a pressure, and Hochhäusler is showing us, throughout The City Below and in its final minutes, both the 99 percent running roughshod over the old system and the 1 percent morphing into something as yet undetermined." [From an essay by Michael Sicinski published by Moving Image Source. Sad that this terrific film has no user comments at all.]
#1 Hahaha (Hong Sang-soo) 86 pts | 8 votes 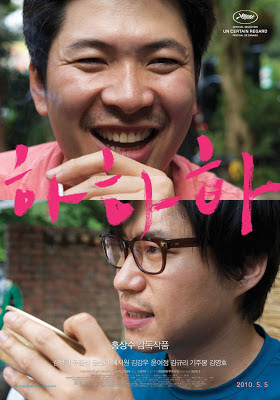 "Food is an important element. Food is central to every cultural idiosyncrasy in the world; Korea is not the exception and it is really sensitive how Korean specificities in relation to food are brought to the center of this mosaic. Count the scenes that develop around meals."
Yes, this is the third time Hong has won the Undies in 11 years. This despite having no fewer than three (3) films also eligible for the survey proper in 2012.

For the record, here are the next 10 films, in alphabetical order:

Some genuine surprises. Always a pleasure, Mike. Thanks.

No CONFESSIONS? I think it might be the best movie of the '10s, so far.

Also, wow, I didn't even know that Svankmajer film existed. "Subject for Further Research," to be sure.

You might want to reevaluate use of the term "undistributed" since at least one film here, ESSENTIAL KILLING, has a VOD deal and is on Netflix right now. I understand it's all about the NYC run for Skandies, but saying it's a list of the "Best Undistributed" when one of the films technically has distribution seems problematic.

I'm not gonna invent a new word for my purposes or make the post title 30 words long, so people who don't read the explanation will just have to be misled.

Thanks for the typically dismissive response. I would expect no less. Lets see, you could add the word "theatrically" to your post title. That doesn't make it 30 words long, and the word exists so you don't even have to invent it!

But that, too, would be inaccurate. Some of the films may well have been theatrically distributed in cities other than New York. The eligibility rules are too specific for a quick post title. That's why I wrote the rest of the post. Sorry if I came off as dismissive, but really, I just can't bother myself about people who only read the title and skim the posters.

HAHAHA and I WISH I KNEW would be in my Top 5, along with Zhu Wen's THOMAS MAO, Freddie Wing's THE DRUNKARD and Clement Cheng's GALLANTS, which I believe are all eligible.

I enjoy what you guys are up too. Such clever work and coverage!
Keep up the fantastic works guys I've included you guys to my own blogroll.
Also see my site - insurance business

I think I did a pretty okay job predicting the Skandies results last year. Let's see how I do this year! Here it goes:

Just for the record, Curling got a week-long release in San Francisco in 2011, so just adding the word "theatrical" won't cut it, as Mike says.

Some great picks this year. If I were a voter, my choices would likely have been something like this: