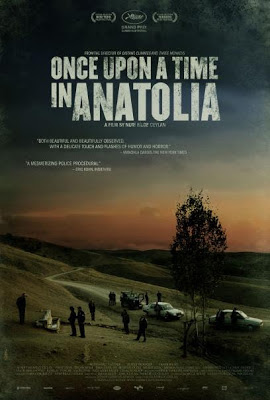 It's Such a Beautiful Day is Hertzfeldt's feature debut (sort of).

Dench makes her fourth Skandies appearance, having placed 5th in Actress for Mrs Brown (1997), 9th in Supporting for Shakespeare in Love (1998), and most recently 6th in Actress for Notes on a Scandal (2006), a film I had completely forgotten about. Everyone else, including McConaughey, is new.

Cronenberg's screenplay for Crash placed 18th in 1997. His only other Picture appearance was for A History of Violence, which he didn't write.

This is a funny scene but this scene also neatly encapsulates everything that's wrong with the movie. It's too broadly comic for the tone of the rest of the film, it would feel more comfortable within the confines of something like O BROTHER, WHERE ART THOU? than within DJANGO. It's also very odd to interrupt an action with a side digression that features neither Django nor Schultz and then pick up the action, Tarantino the writer is being too indulged by Tarantino the director. I think the digression of Big Daddy and his clan buddies trying to kill Schultz & Django is a questionable one already considering how long it takes to get the heroes on the road to rescue Broomhilda (and we still have the Winter travel passage set to "I Got A Name").

I don't even think it's that funny to be honest. Easily my least favorite scene in the picture. Though I do laugh at:

Hill: Nobody can see.
Johnson: So?
Hill: So it'd be nice to see!

But even then I agree that it belongs in a different movie.

Nice to see Schoenaerts got 10 other votes. While his performance was the best part of BULLHEAD, I did not expect the kind of subtlety and humanity he brought to RUST AND BONE.

Another film that barely missed my top 10. Sorry Turks.

This scene, though, oh my. DJANGO UNCHAINED ranks as the biggest bummer of the year for me (I liked it fine, but I was hoping for some crazy masterpiece of BASTERDS proportion).

This seen is not indicative of a lack of tonal discipline in my opinion. On the contrary, it's entirely consistent with QT's strategy of undercutting traditional power with ridicule. See also Calvin Candie's idiotic French pretensions and the last 5 minutes of Death Proof. (Do not see the first 108 minutes of Death Proof.)

Don Johnson's discussion with his slave about how to treat Django was much funnier though this scene was amusing enough.