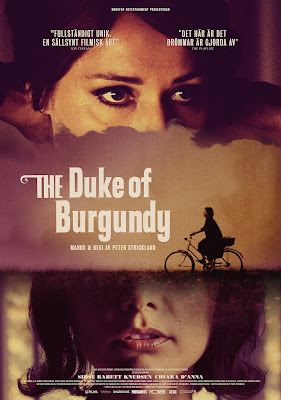 Strickland didn't make the cut for Berberian Sound Studio, in either Director or Screenplay (and his first feature was never released in the U.S.).

As previously noted, Rampling also placed 3rd in 2001 for Under the Sand; her only other nod was at #10 for Swimming Pool (2003). Jackson makes his third appearance, all in Tarantino films; he previously placed 18th for Jackie Brown (1997) in addition to the aforementioned 4th-place finish in Supporting three years ago for Django Unchained. (Pulp Fiction predates the survey by one year. He almost surely would have won Supporting Actor.) Rylance placed 11th in the lead category for Angels and Insects way back in 1996, and thus sets a new record for the longest elapsed time between top 20 appearances (19 years, currently the maximum possible*). Nixon is not a crook. Sorry. Nixon is new.

Even though I 30-bombed Nixon (my only 30-pt nominee in the last two years I think), I'm pleased to see her make #3 here. Seemed JAMES WHITE was either underseen or underappreciated, but Abbott showing up at #4 and Nixon at #3 is really cool. Good job other voters.

Surprised that William H. Macy hasn't made the list since 1996.

re Macy, surprised the AVB cared for THE COOLER that little. Also, Irma P. Hall didn't make it for a Coen Bros. movie?!?!?

Alec Baldwin placed 8th in S. Actor for The Cooler, so clearly enough voters saw it for Macy to have placed had his performance impressed folks. It evidently didn't. (Personally I didn't like much of anything about that movie. Checked my TONY review, and I say "Macy leans hard on his Howdy Doody grin and hangdog shuffle, while Bello seems perpetually frustrated that she hasn't been given a stick of gum to snap.")

Richard Briers has also left us, it turns out.

I had to look up Karron Graves.

Pretty sure Graves was my top choice in S. Actress that year. Sublime portrait of a scared young woman who tries to do the right thing for as long as she can, until the pressure becomes too much to bear. (Saved you a Google: She played Daniel Day-Lewis' servant girl in The Crucible.)