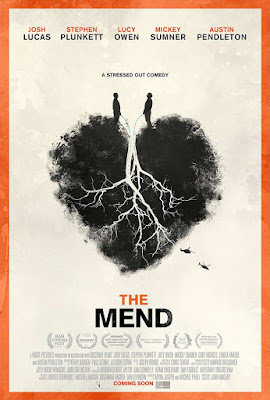 This is Villeneuve's first appearance (because all of his previous movies stunk).

In addition to her many "nominations" (see post below), Blanchett has placed 16th for Oscar and Lucinda (1997), 11th for Heaven (2002), and 17th in Supporting for Notes From a Scandal (2006). In addition to his several nominations (see same post below), Fassbender has previously placed three times in Supporting: 14th in 2009 for Inglourious Basterds, 12th in 2010 for Fish Tank, and 16th last year for Frank. Jenkins landed at #16 in the lead category for The Visitor (2008), his sole previous nod. Ferguson is new.

Docter helped conceive the story for several beloved Pixar films (Toy Story 2; Monsters, Inc.; WALL•E), but his only previous actual screenplay credit is for Up, which placed 7th in 2009. LeFauve and Cooley have no previous credits.
Posted by md'a at 7:13 AM

Pleasantly surprised that 12 other voters found room for Rebecca Ferguson. I'd assumed my vote was a throwaway.

That's admittedly the one I've seen the least of—first 10 minutes just annoyed me. And there are a couple of early films I haven't seen at all. But Polytechnique, Incendies, and Prisoners were all W/O's.

Among scenes I voted for, there's no way "Speak Low" from PHOENIX isn't there; hard(er) for me to imagine that the single-take fight from CREED isn't if the AVB has Jordan in Top 5; and I still hold out hope for ball-less soccer from TIMBUKTU.

I short-listed, but didn't give points to Margot Robbie in the Bathtub from THE BIG SHORT and Jackson's narrated killing from HATEFUL EIGHT. And surely there's something from MAD MAX DEUX.

What gets left out in the cold?

My original predictions for Best Scene:

I already whiffed by predicting the sandstorm scene that high, but I feel like everything else has a good chance of placing. (Though perhaps I'm overestimating support for The Forbidden Room again.) If I were certain the respective films were more seen, I'd predict the "harassment" meeting in Approaching the Elephant or the torrent countdown from Unfriended. I don't think there'll be another scene from Fury Road though.

ah, I had in my head that the SICARIO border crossing had already appeared (I also short-listed it, but it didn't make final cut). That's as much a slam-dunk as PHOENIX. So really only two spots left, I guess.

I dunno about "Speak Low". I'm a huge PHOENIX fan but didn't vote for that scene, because it only plays in context. Out of context it's just some woman singing and a dude looking shocked.

Then again, none of my top 3 scenes even made the Top 20 (and I'll be stunned if they appear from now on, except perhaps the one from A PIGEON...), so what do I know.

I've always wondered how much context mattered to voters when it comes to Best Scene. There's no way "Speak Low" isn't making it, though, so I'm guessing the answer for most is "not too much"? Otherwise, I don't think scenes like "Diamonds" would make it either.