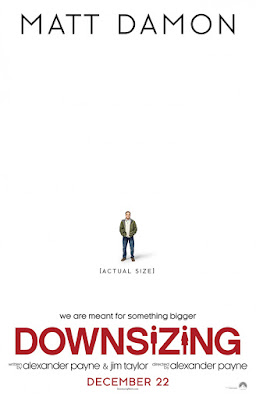 (This is just the closing credits, but I counted votes for the whole epilogue, which plays as one scene imo. Also, Vimeo finally noticed that I've spent years using their site to host copyrighted material and shut down my account, so you're only gonna see videos for Scene if they're on YouTube.)

Serra makes his first appearance, having drummed up comparatively little support for Quixotic, Birdsong or Story of My Death.

Waltz, a previous Skandie winner in Supporting (for Inglourious Basterds, 2009), also placed 2nd and 13th in that category, for Django Unchained (2012) and Carnage (2011), respectively. I personally think two of the four performances, including this one here, are kind of terrible, but chacun à son gout. Speaking of terrible, Robbins' sole previous Skandie nod was a merciful (in the sense that at least he didn't fucking win) 6th place finish in Supporting for Mystic River back in 2003. The women are all new.

Congratulations to the Downsizing...frontlash? Would never have guessed back at TIFF that it would sneak on here, but I underestimated the Sallittist wing.

If I've missed this, apologies. But what is the significance of the parenthetical numbers following each entry?

[Janet voice] Not a robot.

Got it. Thanks for helping me not feel like a fat dink.

I would've much rather thought MARJORIE PRIME would be the one the Sallittists would squeeze into the top 20. Will this be the lowest rated film in Skandies top 20 history?

Atli, I think you may be overestimating the broad appeal of Staying Vertical. Otherwise, I think you're doing great.

I'm probably overestimating it a tad, most likely will be 2-3 places lower, but I feel like it has some passiondex on its side, from the Sallittists for instance...

Tom Robbins was awesome in the awesome MYSTICAL RIVER. Too bad my points did not get him into the top 5.

Well, alright, with the caveat that I'm out of the loop on where High Sallittism is these days.

Not far from where Atli was. I can see one of SACRED DEER, MARJORIE PRIME or EX LIBRIS displacing one of those films.

If skipping the Thread helps seal a 'rama victory, I will be pleased as proverbial punch.

One interesting note: We have a tie in points this year (broken by number of votes; I still live in dread of an exact tie), which hadn't occurred since 1996 (in a category that no longer exists, Adapted Screenplay—John Hodge beat Anthony Minghella 232/16 to 232/15). I'm not saying the tie was in Best Picture, but I'm also not saying that it wasn't in Best Picture.

I am, however, saying that I am not a robot.

Out of curiosity, which of the earlier Waltz performances do you dislike?

You think I dislike him in Tarantino movies? Carnage, obviously.