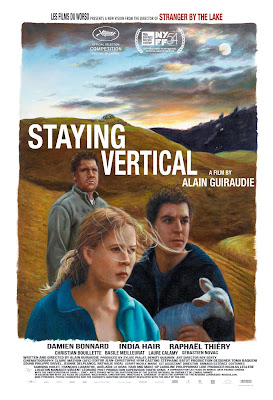 Hong previously placed 17th for both Woman on the Beach (2008) and The Day He Arrives (2012). Bear in mind that many of his films weren't Skandie-eligible. On the other hand, we somehow ignored him last year (30th place) for Right Now, Wrong Then, his best-ever finish in Picture at #11.

Kidman! Fun fact: This is her 10th career Skandies appearance, tying her for 3rd place all-time; only Philip Seymour Hoffman (15), Isabelle Huppert (14), and Tilda Swinton (14) have shown up more frequently. (This was an off-year for Huppert and Swinton—Happy End was generally ill-received, and only one member of the AVB flipped for Swinton's dual Okja role—so Hoffman holds onto his title for a while longer.) However, The Killing of a Sacred Deer marks her first nod since Rabbit Hole back in 2010. And apart from maybe Stoker, it's not as if we overlooked anything. Lotta crap choices  in recent years. Anyway, here's her complete rundown, featuring three near-victories in Best Actress:

(She was also one of the five Actress nominees in 1995, the survey's Oscar-style inaugural year, for To Die For, though I don't count that record-wise.)

Chastain has taken up the no-Kidman slack, as this marks her fifth appearance in the top 20 since 2011, when she placed 7th and 8th in Supporting for Take Shelter and The Tree of Life, respectively. She's also landed at #5 in the lead category for Zero Dark Thirty (2012) and at #13 in Supporting for Crimson Peak (2015). Both French dudes are new.

Mungiu's screenplay for 4 Months, 3 Weeks and 2 Days placed 7th. Is that the lowest Screenplay ranking for a film that won Best Picture? [Checks.] Oh, right, The Tree of Life. (#19!) And Grizzly Man, our sole documentary winner to date, didn't place at all, though Herzog does have a writing credit on it.

Did other people also find this to be a great year for Supp. Actor and a very meagre one for Supp. Actress? I'm checking the countdown to see which performances I forgot about, but I've seen nothing so far. (Kidman was fine, but you know. She's no Barry Keoghan.)

Supporting Actress was my first category to fill up (as I keep a tally over the entire year—already have lists going for 2018, with 0-2 names each at the moment). But I voted for a bunch of great performances in movies nobody else saw: Zazie Beetz in Geostorm, Miranda Otto in The Daughter (a film stacked with superb acting), Chinasa Ogbuagu in From Nowhere, Amy Hargreaves in Super Dark Times. And I think only Doug Dillaman agrees with me that Samara Weaving gives far and away the best performance in Three Billboards, even if she's kind of in a different (better) film than the others.

You are seriously in a league of your own, bud! I actually like GEOSTORM more than most people, and noted the Zazie Beetz role at the time, but have long since forgotten about Zazie Beetz and in fact I had no idea she was called Zazie Beetz until just now (haven't checked the IMDb, but I assume she's the Donald-Glover-in-THE-MARTIAN, eccentric-hacker role). Also have no idea who Samara Weaving is - and, having now checked, have no memory of being impressed by the bimbo role of the ex-husband's girlfriend. Yeah I know, sometimes I doubt my commitment to Skandie Motion.

I'd actually considering motormouth Zoo Girl for the nice comic timing in her introductory scene - hopefully she'll get to exhibit this aspect more in the future, as opposed to playing Hot Girl in stuff like THE BABYSITTER and MAYHEM. (Her resemblance to her uncle is disconcerting.)

Hell, I forgot about THE DAUGHTER, on account of that coming out bloody ages ago here. Wildly underrated/overlooked film. Didn't see the other three.