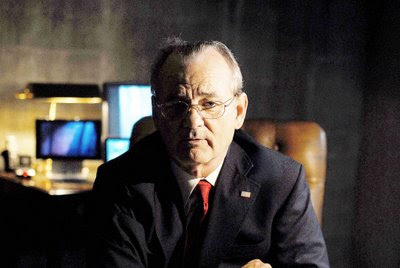 I consider myself a Jarmusch fan, if not exactly a true believer. Two of his early films, Stranger Than Paradise and Mystery Train, are on my top ten lists for their respective years (and I really need to see Down by Law again at some point, since my sole viewing 20+ years ago was far from ideal—big living room full of rowdy teens). "Int. Trailer. Night," his contribution to the Ten Minutes Older omnibus project, ranks among the greatest narrative shorts I've ever seen. (If you've never had the deceptively offhand pleasure, here it is.) With the exception of his wretched student effort, Permanent Vacation, I've liked or the very least admired everything else he's ever done, even if a semi-recent second look at Dead Man failed to convince me that it's a masterpiece.

The Limits of Control, however, had me dry-heaving in my seat practically from the jump. And since it looks as if it's gonna be hailed as one of the year's best films in most respectable quarters, leaving me with freakin' Todd McCarthy for company, I suppose I should try to articulate exactly what it was that I found so repellent. It'll be tough to do so without getting into potential spoiler territory, and this is a film that works best, assuming it works for you at all, if you go in cold, so you may want to bail for the moment and return post-viewing. (It starts its rollout on Friday in NY/LA.)

A quick concession first. Obviously, the film is gorgeous. You will want to leave the theater and fly directly to Spain. And these are by no means the dutiful picture-postcard views seen in, say, Vicky Cristina Barcelona. (Jarmusch pointedly avoids that particular city.) There's stunning architecture on display, to be sure, but there are also numerous unprepossessing courtyards and alleyways, which Chris Doyle shoots in a way that makes them seem simultaneously lovely and menacing. Some will no doubt maintain that the film's compositional splendor alone makes it a keeper, and it's true that had I seen The Limits of Control the way that I initially saw Zhang Yimou's Hero—viz., in a language I didn't understand a word of, subtitled in another language that I didn't know either—I would likely have come away thinking it must be revelatory.

Unfortunately, I do speak English, so I recognized that everyone onscreen was talking a load of crap.

Some of the stuff that irked me is undoubtedly a matter of personal taste. As Glenn Kenny astutely notes in his own rave review, one's man's numbingly repetitive is another man's incantatory. And apparently others don't find the parade of international hipster icons distracting, though by the end I was seriously wondering whether Jack and Meg White might turn up. Plus, it's not as if The Limits of Control represents some startling new direction for Jarmusch—almost every film he's made has involved structural gamesmanship of some sort, variations on a theme. One could make a strong case that this is the Jarmuschiest picture he's ever made, a grand distillation of everything he's always been about.

And yet it still strikes me as unbearably smug and self-satisfied—basically a feature-length riff on my least favorite part of Dead Man, which was Gary Farmer constantly saying things like "stupid fucking white man." The Limits of Control isn't a film made by an artist who's grappling with serious questions for which he can offer no easy answers. It's a jejune statement of principles dressed up as an existential journey and filtered through Le Samouraï and Point Blank. It's the kind of painfully reflexive exercise in which a character mentions that she likes movies in which people just sit there onscreen saying nothing, whereupon you immediately check your watch to see how much time will elapse before the next line of dialogue. (About a minute.) When Isaach de Bankolé's Lone Man—after enduring numerous exasperating monologues that collectively amount to a checklist of Jarmusch's bedside reading over the past few years—finally confronts "The American," who turns out to be Bill Murray impersonating Dick Cheney, I could hear Jonathan Rosenbaum cackling and fist-pumping all the way from Chicago. Take that, tyrannical corporate Yankees! Pure imagination wields a power you can scarcely comprehend!

I find it especially bewildering that so many people, including Jarmusch himself, are citing Rivette as a major influence. Granted, I haven't yet seen the colossal Out 1, so my knowledge of The Thirteen is restricted to their cameo appearance (I gather) in The Duchess of Langeais. But merely withholding your protagonist's agenda does not in and of itself constitute mystery and intrigue, especially if it's fairly obvious—at it will be to anyone even glancingly familiar with Jarmusch—that no tidy explanation awaits in the final reel. Surface elisions notwithstanding, The Limits of Control is so anti-mysterious that it's practically Euclidean. There is not a single moment of doubt, confusion, uncertainty or ambivalence to be found; Jarmusch knows precisely what he wants to say and constructs each and every scene as a mini-essay on the value of creativity and freedom. Is there an antonym for "contrapuntal"? Because this movie demands one.

THE ASIDE I SEEM TO KEEP MAKING THESE DAYS: What about Von Trier? Isn't he every bit as, uh, dogmatic? Of course he is. But Von Trier doesn't traffic in good-lefty homilies—when he serves up a proclamation, it's one that will challenge (not to say fuck with) an intelligent viewer's preconceptions, as opposed to gently massaging (not to say jacking off) his/her self-image.
Posted by md'a at 8:49 PM

I'd call that a damn incisive analysis.

I'm sure I'd share a similar opinion since the trailer alone almost triggered dry-heaving in me.

Hmmm. I am still excited to see it. I am a Jarmusch junkie. Plus, I think sometimes that "dull repetition" he employs is more deliberate than it might seem at first. It's hard to show someone making no progress in their quest without encountering redundancy. Sometimes the fact that a story is boring, or that the dialogue between two people is masturbatory actually *is* the point of a scene.

That said, I stand forewarned.