Festival Flashback: Week of Apparently This Feature Will Be Somewhat Sporadic. 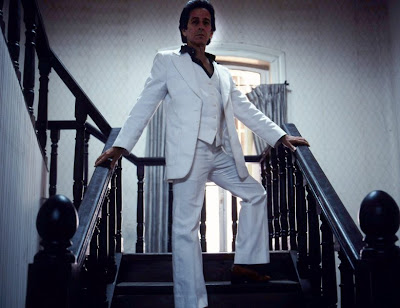 Tony Manero (Pablo Larraín, Chile/Brazil): 33 [NYFF '09]
["Ah, one for the boys over at Slant," I thought, and sure enough. For those not temperamentally inclined to celebrate uncompromising cine-machismo for its own sake, however, this is pretty thin gruel, deeply unpleasant without ever coming within spitting distance of enlightening. Once you've been startled by Raúl assisting an old woman home and then unexpectedly pummeling her to death for her TV set, and then seen him pawn the TV in order to fund a replica of the multicolored Saturday Night Fever dance floor, you're good to go, literally—everything that follows is more of the same. American Psycho didn't really work as a movie, but at least Bret Easton Ellis had a coherent idea, in that you can readily see the connection between '80s materialism, Bateman's sadistic violence and the transformation of Genesis into a Phil Collins solo act. How exactly does living under Pinochet translate to disco fever? Why are we watching Tony Manero and not, say, Roy Neary or Luke Skywalker? I really don't get the sense that Larraín ever thought that through, and Alfredo Castro's deliberately affectless performance (uncompromising!) offers no clues. Ultimately, the whole thing struck me as extravagantly pointless, just arthouse high-concept. Some claim it's intended as black comedy; if so, the joke is on me.]

24 City (Jia Zhangke, China/Hong Kong/Japan): 58 [NYFF '09]
[Because I (as usual) went in totally tabula rasa, my reaction to Jia's latest must perforce be divided into two radically oppositional eras: BJC and AJC. Before Joan Chen showed up, 24 City struck me as a fairly staid but nonetheless often engrossing documentary—yet another troubling portrait of the New China, but with more direct emotional access to the average citizen than Jia's semi-detached style generally permits. The middle-aged woman riding the bus tells her story with a rough-hewn eloquence that's remarkably moving, and I also got involved with the dude who mostly wanted to reminisce about getting dumped. ("You said it first.") Then Joan Chen showed up, and suddenly I didn't know what I was watching anymore. Was the whole thing a sham, à la Dadetown? Hard to believe some of the previous interview subjects were actually actors. Still, I found myself watching the sequences After Joan Chen with deep suspicion, now fundamentally incapable of connecting with the film on the simple, visceral BJC level. (Only when Zhao Tao appeared at the end was I even 100% certain that I hadn't just been fooled by an amazing Joan Chen lookalike, given the cute bit about her being nicknamed after a character in one of Chen's early Chinese movies.) As I wrote a decade ago, in reference to Unmade Beds (which seems more and more like a watershed movie with each passing year): "It's as if I wear one pair of glasses for fictional narratives and another pair of glasses for documentaries, and Barker's film left me unable to determine which pair of glasses I was supposed to put on, and without glasses my vision's maybe 20/500, and so I found the entire experience...well, really darn blurry." Even after going home and looking up other reviews and whatnot, I still don't really feel like I understand what Jia was aiming for by abruptly shifting from real testimonies to fictitious ones—it doesn't seem to add (or subtract) much from the overall conception, and both halves of the film seem to me equally hit or miss. Still, it's exciting to see people in a Jia movie who are more than just tiny figures blocking our view of some defunct building or scarred landscape, whether they're actors or not.]

Pontypool (Bruce McDonald, Canada): 63 [TIFF '08]
[Alas, all the best lines have already been taken (mostly by Lee Walker, who saw it first), from "the first semiotics horror movie" to "Laurie Anderson was right." I just dearly wish Burgess had figured out somewhere to take his genius premise—as it is, the movie just sort of stops once our surviving heroes figure out a cure, leaving numerous head-spinning implications out to dry. Still, if you're an inveterate wordhound, or perhaps have a useless undergraduate degree in philosophy, this film is absolutely unmissable. (James Callan, Leslie Ann Kent, Matt Knoth, this means you.) Funniest line of the year (in context, and aided immeasurably by Stephen McHattie's suddenly halting delivery as its implication becomes clear): "Please do not translate this message."]

Big Man Japan (Hitoshi Matsumoto, Japan): 50 [TIFF '07]
[Concept of a washed-up superhero loathed by the populace he's sworn to protect is reasonably amusing—biggest laughs come from the graffiti adorning his crummy house and the banners (STOP WASTING ELECTRICITY!) hung along the route to the power plant where he juices up—but it's mostly Matsumoto's hangdog, perpetually distracted performance in the title role that gives this sporadically funny spoof a little bite. (I can easily believe that he's a Kitano-level comedy star in Japan; any attempt to dub the film into another language would likely kill it dead.) F/X battle sequences are mostly just dopey, though, and of course there's no excuse for a movie like this to run anywhere near two hours.]

Jerichow (Christian Petzold, Germany): 63 [TIFF '08]
[Precise, intelligent rendition of a tale you've likely seen many times before, both in its original '40s incarnation and in the umpteen remakes and glosses and updates said landmark noir has inspired over the years. All Petzold really does is make one massively subversive change (fully evident only in the final moments) that prompts us to question certain built-in assumptions and prejudices we unknowingly toted into the theater. Which is certainly productive, but doesn't in itself make this a great movie—more of a fascinating curio. Petzold's "project" (for lack of a better word) here necessarily privileges a retroactive intellectual response at the expense of the immediate and emotional one offered by the "dominant" scenario; just the fact that I'm using all these stupid "scare quotes" says a lot about why I didn't respond all that ardently. That's Ed, I actually like it a good deal more than the deliberately unnamed classic it's riffing on, which I only gave a 52.]

Summer Hours (Olivier Assayas, France): 68 [NYFF '08]
[Neat trick Assayas pulls off here, slowly subtracting characters until it becomes clear that the film's true subjects are all inanimate. And yet at the same time he gives everyone's feelings their due, discreetly following the eldest and most sentimental sibling into the bedroom when he gets all weepy about having to sell the house; letting the other two justify their decision without writing them off as cold, rootless global-econ maroons; even halting the Cold Water Redux finale to give one grandchild a brief moment of longing and regret. As it happens, my own family (paternal side) has a similar house in Carmel-By-The-Sea (of Clint-as-Mayor fame), which my dad and six surviving aunts/uncles opted to keep when their parents died back-to-back in the mid-'90s; having just spent a weekend there in April and been suffused by childhood memories, I'm probably unusually receptive to this film's elegiac tone at the moment, despite having more in common with Binoche's Adrienne than with Berling's Frédéric (NYC being as far as it's possible to get from Carmel/San Jose without actually leaving the continental U.S.). But just the degree to which I'm digressing into autobiography—and I haven't even touched upon the living-room couch my mother wouldn't allow any of us kids to sit on, which pointless restriction annoyed me so mightily that I later constructed an entire screenplay around it—gives you an idea of how potent Assayas' musings on history and utility prove to be. A very small film, but lovely.]
Posted by md'a at 3:34 PM

NYFF '09? Is that a typo or a different film fest?

24 City felt like a huge propaganada to me; it might be because I'm pretty well-versed in China's history. However the movie could have succeeded by only focusing on just the recent history. Ah well.

Since you seem to be tackling the remainder of Miyazaki's films I recommend checking out Porco Rosso; based on your previous comments I suspect you will prefer it over the rest of his work.