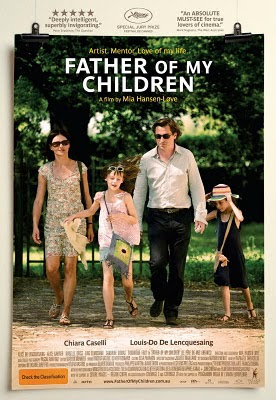 [I can't embed this one because YouTube blocks it in parts of Europe, but you can watch it here. Normally I'd warn folks about spoilers, given that it's the ending, but trust me, it won't make any sense anyway. It doesn't make sense even if you've seen the film. Those last two people who speak? We've never seen them before, have no clue who they are. Possibly the most absurd non sequitur of all time, which is presumably what thrills those who voted for it.]

There ain't any today.

Toy Story 3 is Unkrich's first feature (though he "co-directed" a couple of previous Pixar films—I don't count those as similar to e.g. Shari Springer Berman & Robert Pulcini, as Pixar's co-directors get a separate title card after the primary director).

All four actors are new, and neither Audiard nor any of his three collaborators have placed before in Screenplay.
Posted by md'a at 11:04 AM

Isn't Sabine Azema's hair SO red? I short-listed that awesome follow-the-grass-through-the-cracks scene, but had to leave it off.

All the Jessica Barden fans have outed ourselves on Twitter -- me, Prigge, El Chuck, Fungsta and Gemko. Will be curious to see what it's "Strength of Impact" (or whatever that state is called) is. I can't imagine having seen TAMARA DREWE (Mike aleady said relatively few people did) and not being taken by her.

Also, good job all the other folks who also voted for Riz Ahmed (whom I went with over the white Yobbo Muslim). Hopefully, this will foreshadow more FOUR LIONS, especially in screenplay where it will clearly finish in the top 2.

Ifans and Jarvis FTW. Not too crazy about Riz Ahmed or the last scene of Wild Grass, though.

Hmm, yet another movie I haven't seen (that makes three out of four of the "Best Pictures" so far.) So much for me thinking I'd done a good job covering my cinematic bases last year. Back to the Netflix queue go I.

Didn't get around to seeing TAMARA DREWE, but my last minute cramming got Ahmed and FATHER OF MY CHILDREN in the top 20. You're welcome.

Jody Long's (Jessica Barden's) origins story is in Posy Simmonds' Lulu. "This is an utterly wonderful cartoon strip about a little girl who is taken unwillingly to a museum by her Dad. Whiile she sulks on a sofa, a pair of cherubs come out of a picture and tell her not to pick her nose. Then they take her into other pictures on a whirl of adventures - they swim in the sea, roll in the snow, sit on a (Velasquez) horse, eat cherries from a Dutch still life..." Age 2-5 - review by John de Falbe