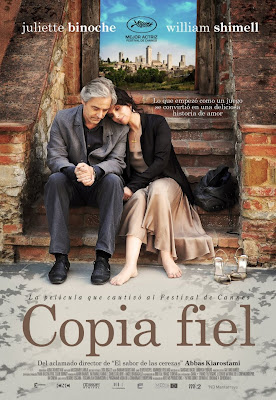 Super awful CAM! How can anyone watch an entire movie like this?

Kiarostami previously placed 15th for Taste of Cherry (1998) and 8th for The Wind Will Carry Us (2000). That was one long-ass decade of middling experimentation.

Dunst gets her first nod since playing the title role in Marie Antoinette (#16, 2006); she also previously placed 12th in Supporting for The Virgin Suicides (2000), 16th for crazy/beautiful (2001), and 10th in Supporting for Eternal Sunshine of the Spotless Mind (2004). In addition to his Half Nelson win (and his other nod this year; see #15), Gosling has finished 6th twice, for The Believer (2002) and for Blue Valentine last year. Hosseini and Oprisor are new.

Sorkin, as noted below, won Screenplay last year. Zaillian, whose best work predates the Skandies, has never before placed (and for all I know, has never met Sorkin).

Nice one-sheet. If I ever met Binoche, I'd be tempted to copia fiel.

Yeah, the one-sheet is gorgeous.

I was hoping someone would jump on that. (That's what she said.)

Wow, this Director race is interesting in my opinion.

Glad to see Burj Khalifa up this high. Aside from that and DRIVE's opening getaway, it seems like none of my other scenes made the top 20.

I wonder how many other people gave film points to GHOST PROTOCOL. While I don't think it's fair to overrate a film just because it accomplishes what it sets out to do, GHOST PROTOCOL really does legitmately work as not only the most entertaining but one of the most assuredly put-together films of the year.

It's kind of a shame that Brad Bird didn't make the top 20 too (would also like to see if I'm the only one who gave him points), but I can't be too upset because this year was terrific and I mean wow who would have thought I couldn't make room for Martin Scorsese in my top 10 directors.

GHOST PROTOCOL suffers from amazing 2nd act producing 3rd act fatigue. When you have as great as a 1-2 punch as the Burj Khalifa/sandstorm scene in your 2nd act, you're bound for a letdown, but (SPOILERS, I GUESS) to close the film with a token fight in a parking garage (where the mad scientist OF COURSE has superhuman strength suddenly, blah blah) and Jeremy Renner punching people in a server room just felt like, well, fuck it, let's not even TRY to make a memorable setpiece as good as the last one.

(TINTIN has a similar problem in re: an astonishing 2nd act piece in the Middle East in my opinion.)

- V. nice one-sheet, though I'd go with the U.S. one if forced to choose (Binoche putting on the earring).

- I gave scene points to both Burg Khalifa and "sneaking into the Kremlin," which I kind of like a bit better, frankly. Had Ghost Protocol been released in 2010, it'd be in my top 10 -- so I'm with you, Zach. It embodies what Hollywood does best nowadays.

- Just looked through some results from years past, but not all of them. Am I correct for assuming that this is the 1st year in which 5 movies scored over 200 points?

- Continuing on the top-heaviness of this year's results, Certified Copy had almost the same number of points as last year's winner, Dogtooth. I feel bad for whichever movie ends up at #2.

- Of course, the point comparison is only significant if the voting pool stayed fairly constant. Am I correct to assume that we didn't see a dramatic increase in the number of voters this year, Mike?

- Mildly surprised that Margaret finished ahead of Copy. It looks like the Passiondex for that one will be even higher than for Pleasures.

I wonder how many other people gave film points to GHOST PROTOCOL.

Three other people. But you all gave it the minimum 5 points, so it didn't even come close to placing.

I felt the same way the first time, but liked the finale considerably more when my Dad dragged me (not exactly kicking and screaming) to see it again. It just seems off because it's so much more of a Pixar action sequence than a M:I setpiece.

V. nice one-sheet, though I'd go with the U.S. one if forced to choose (Binoche putting on the earring).

I'm not keen on the way the original image has been Photoshopped.

Am I correct for assuming that this is the 1st year in which 5 movies scored over 200 points?

No, but it's the first time since 2001 (In the Mood for Love, Mulholland Dr., Memento, Ghost World, and The Man Who Wasn't There).

Am I correct to assume that we didn't see a dramatic increase in the number of voters this year, Mike?

Yes. I added two new voters, but two others (Missy Schwartz and Dave Cowen) chose to abstain due to not having seen enough films last year. Matthew Butcher did vote, which he hasn't in a while, but I think that's it. Pretty much the same pool.

I'm glad to know I'm not the only one who prefers the Kremlin scene to the Burj Khalifa scene (though that one is still great). How many votes did that one get?

So I'm guessing the top 3 scenes are the opening of MELANCHOLIA, Elevator Kiss from DRIVE, and "Nights in White Satin" from HOUSE. Not bad.

So I'm guessing the top 3 scenes are the opening of MELANCHOLIA, Elevator Kiss from DRIVE, and "Nights in White Satin" from HOUSE. Not bad.

If that's the case, I'm kind of shocked that the Rincon trade from MONEYBALL didn't make the top 20. I figured I top 10 for sure for that one. Also MARGARET's King Lear.

I am guessing and most likely wrong about one of them. The Lear scene, seems like a good bet actually.

Zaillian, whose best work predates the Skandies, has never before placed (and for all I know, has never met Sorkin).

FWIW, I remember reading a live-tweet comment from an awards ceremony mentioning that Sorkin and Zaillian were meeting for the first time on stage when they received a Best Screenplay award. I think it was the New York Film Critics' Circle Awards.

Would've lost a bundle on a bet that one of "Elevator Kiss," "Nights in White Satin," "Dissecting King Lear" and Melancholia's Prologue would be left out of the top 20 entirely. I would've guessed that the above were the top 4 scenes overall.

It just seems off because it's so much more of a Pixar action sequence than a M:I setpiece.

THIS. I loved this sequence because it reminded me so strongly of Monster's Inc and, to a lesser extent, Toy Story 2 -- but this time for realzies! But cool as that aspect of it is, it still feels too familiar to buoy the third act given the overwrought "drama" between Ethan and Brandt and the super lame ending. It can't help but feel like a letdown after all the awesomeness of acts one and two. I agree the ending's less of a disappointment on second viewing, however. (Though maybe I should note my first viewing was 16:9 digital IMAX, while my second was in 70mm IMAX, so basically my jaw was just on the floor that whole second time.)

2001's "5 films scoring over 200" line-up feels similarly epic in breadth and brilliance to this year. In the Mood for Love and Certified Copy in particular feel connected across the decade. Stairways and aching just-misses.

Bad poster. The one with the earring is just better.

What the hell is the "dissecting king lear " scene?

It's the scene in Margaret where the class dissects King Lear. #duh

for those unfortunate brazilians like me, margaret has not yet been released on screen.

and google couldn't find me either. so, no #duh.

But the first comment here that mentioned Lear noted specifically that it was from Margaret:

If that's the case, I'm kind of shocked that the Rincon trade from MONEYBALL didn't make the top 20. I figured I top 10 for sure for that one. Also MARGARET's King Lear.

"Offence not taken", what the eff, my fellow countryman.