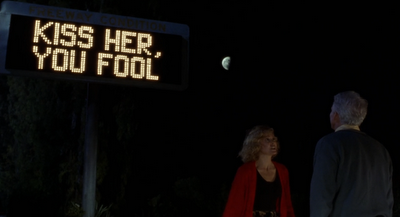 One of the first films I reviewed on my site, back when I was just putting up one-sentence thoughts for a handful of friends and had zero expectation of launching a career. No point in even linking to it, here it is in full: "Flashy and all, but these characters were just too awful to no purpose." So to expand upon those trenchant observations: the problem isn't that all three leads are hateful but that their odious qualities seem entirely random, rooted not in behavioral exactitude or even pop psychology but merely in screenwriter John Hodge's flailing effort to find some kind of story in what's really just a scenario. Eccleston's recurring voiceover narration posits it as a cautionary tale about friendship and trust and how easily both can be corrupted, but it has no sting because these people don't seem to like each other except insofar as they band together to hate everyone else even more. And even if one gets a charge out of watching piranhas devour each other when deprived of food—which is to say, if sheer nastiness will suffice (and I respect that)—the movie goes permanently off the rails when David suddenly decides to go live in the attic and start spying on Juliet and Alex through holes drilled in the ceiling (which holes are mysteriously unnoticed by the detective and his flunky when they show up, even though the perspective from above suggests it would look like a construction site even at the briefest glance). Hodge and Eccleston do their best to present it as a worm-turns breaking point but it just seems contrived, as does everything else including the idea that somebody who's stolen cash from gangsters (or whoever's interests Peter Mullan represents) would hide out and/or commit suicide (?) by applying for a room in a shared flat rather than just checking into a hotel or duh skipping town. There's just nothing here apart from mild bad behavio(u)r, but can we justifiably complain? Title tells you exactly what to expect.

Can't quite decide whether it wants to be a gung-ho hagiography or a tell-all character study, and winds up veering back and forth between the two. First hour is mostly dull apart from the opening speech—I remembered "Rommel, you magnificent bastard! I read your book!" but had completely forgotten the lengthy, visually undistinguished battle that precedes that famous line—and the movie seems to regard Patton as a noble ass-kicking anachronism, the perfect warrior born in the wrong era. Just when I was about to fall asleep, however, he suddenly turns into a glory-obsessed tyrant willing to sacrifice men's lives to get his name in newspaper headlines, with George C. Scott modulating the performance into a more naturalistic take on Buck Turgidson. For the next hour or so, he's the least sympathetic war hero imaginable—it wouldn't be that hard to depict his sidelining in the wake of the slapping incident as an unfair PR move in response to national overreaction, but instead it's treated as just and proper, and Patton's outbursts as symptomatic of a deep-seated, thoroughly destructive narcissism. Ideally, the final hour, in which Patton drives an exhausted Third Army across France and into Germany, would have complicated matters by acknowledging the utility of such repugnant qualities in times of war, and there's a smattering of that uncertainty...but for the most part, Patton retreats, ignoring the toll the campaign must have taken on the men (we see nothing but Patton taking pride in their efforts on his behalf) and concluding on a rueful note that suggests a world-class stud being put out to pasture. (There's also a clumsy allusion to his death-by-auto just six months after WWII ended, which was lost on me until I did the Wiki-research.) So one-third of a great movie, more or less. But it's a pretty damn bracing third.

Gotta think Steve Martin looks at this today and wishes, as we all do, that he'd cast somebody other than his wife (now ex-) as the female lead. Not that she's terrible, but the sort of Jean Arthur U.K. vibe that was apparently intended never quite comes across—the more Tennant tries to project carefree wackiness (driving on the wrong side of the road; tuba duet with mum on the phone), the more she seems like a perfectly nice lady who's way out of her comedic depth...especially by comparison with Sarah Jessica Parker, whose hyperactive performance as SanDeE* lays waste to the bubbleheaded stereotype the character might have been on paper. Wondered if I might now appreciate its loving jabs at Angelenos more, having spent the last few years in the vicinity, but Martin actually gets lots of things wrong for the sake of weak humor; early on, everyone ignores a massive, furniture-displacing earthquake, carrying on with their small talk as if oblivious, whereas in reality the slightest tremor gets discussed and analyzed for days. (I did laugh when the trendy restaurant constantly pronounced as Lidio turned out to be L'Idiot.) And Mick Jackson, who would go on to direct such winners as The Bodyguard, Volcano, and that recent TV-movie about Temple Grandin (DISCLAIMER: I have not seen any of these, in fact I have literally not seen anything Jackson has worked on since), has no sense of how to shoot comedy, making a particular hash of anything remotely kinetic—sequences of Martin driving off-road to avoid traffic and exchanging casual gunfire on the L.A. freeway get hack-style coverage, cutting every half-second to obscure the spatial incoherence. Some decent laughs here and there, but the West Coast Annie Hall it decidedly is not.

* (Nothing to see here; the asterisk is part of her name.)

Curtiz's last film, shot when he was terminally ill and reportedly half-directed by John Wayne...but that doesn't explain why the script is so incoherent. Never seen a movie set up and then abandon so many perfectly serviceable plots en route to one that barely hangs together—it's like watching an adaptation of a short story collection involving the same cast of characters. The movie I really wanted to see was the one in which the Duke lets a wanted criminal (Stuart Whitman) he's extraditing escape; goes undercover to nab the titular Comancheros (white dudes allied with Comanches; this is Civil-War era); sets up an alliance, using an alias, with an especially evil-looking, partially-scalped Lee Marvin (whose sudden appearance is a welcome jolt of malicious energy); then runs into his escaped prisoner at a poker game and not only can't arrest the guy but has to surreptitiously persuade him not to blow his cover, lest Lee Fucking Marvin slaughter them both. Does that not sound like primo entertainment? Instead (spoiler!), Wayne immediately kills Marvin and re-arrests Whitman, and the movie simply returns to the track it had been on 20 minutes earlier, ready for the next puzzling detour. Likewise the early, not-terribly-convincing romance between Whitman and Ina Balin, which logic dictates will resurface at some point, but get comfy—she's absent from the screen for like an hour while the boys mosey elsewhere, then switches allegiance as if trying on a new hat for size, even though it means death for the only family she has. By contrast, any seams in the direction are difficult to spot, at least for me—it's the same amiable, relaxed production throughout, plausibly the work of a 75-year-old man with little to prove. Judging from synopses, looks like Fox struggled to make Wayne the star, when the source novel had Whitman's (mostly innocent) criminal as its hero; the strain definitely shows.

Waxed mostly enthusiastic in my review for Las Vegas Weekly, and it's possible that I'm overrating it slightly just because it wound up being something other than the generic grrl-empowerment tale promised/threatened by the opening reel. Compared to Pixar's best work, Brave feels skimpy, even skeletal; there are too few complications, and even some of the existing ones, like what happens to Merida's brothers, don't amount to much. But the curveball that is the movie's main plot, in addition to belatedly introducing some proper Pixar-style nuttiness, complicates the young heroine's self-actualization by acknowledging one of her parents as a person (so to speak) rather than just an impediment, which is almost revolutionary for this genre. If the film isn't as radically feminist as Manohla Dargis seems to demand—nothing less than a declaration of intent to eschew romance for life will do, apparently—it's nonetheless progressive in a way that I much prefer to the pushy, tomboyish approach it flirts with at the outset. Chafing at societal expectations only takes you so far.

"Temple Grandin" is okay---I mean, if you think "Rain Man" should have just been Dustin Hoffman yelling "Wapner!" over and over for two hours, and if you think Claire Danes is as good as Dustin Hoffman---but, yeah, Jackson's inability to direct anything is not limited to comedy.