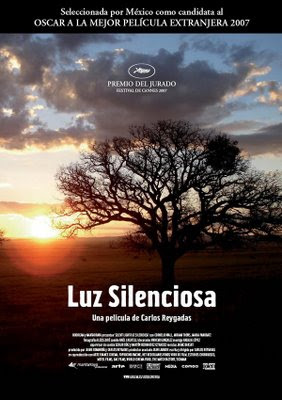 [This scene skates right up to the limit of what I consider acceptable lengthwise at nearly 18 minutes—it's fully 25% of the entire short feature—but it's such an extraordinary piece of filmmaking that I couldn't bring myself to deem it ineligible. Nor could I edit a shorter version that didn't seem to ruin its integrity, so I wound up creating two files. (The whole film is already available on YouTube, but really badly squashed, and the compositions are beyond crucial.) Minimal dialogue is in French and burnt-in subtitles are in Spanish, but I assure you, it couldn't matter less. If I had to vote for my single favorite scene of the past ten years, this would very likely be my choice.]


* Here I must yet again reiterate [sic] my plea for members of the August Voting Body to refrain from strategic point allocation. The #2 film received 216 points, which means that Silent Light finished 3rd instead of 2nd solely because a voter who shall remain nameless, and who thought Reygadas' film the best of the year, chose to give twice as many points to the film at #5 on his/her list, simply because—by his/her own admission—(s)he felt the other film needed more help. As it happens, the other film in question still failed to place in the top 20 (and in fact received no other votes), so the strategy wasn't even effective. But more to the point, I specifically ask you guys not to do this in the annual instructions. So please don't, okay?
Posted by md'a at 12:52 PM

Interesting. 3 of the 5 top scenes have gone to foreign language films (and I wouldn't at all be surprised if the other 2 slots went to sequences from, say, Silent Light and Let the Right One In). That's some form of accomplishment in and of itself, no?

I'm guessing one of them is the 'awesome' opening shot of Silent Light, but most likely the other one is a Burn After Reading scene. Still, 4/5 isn't bad. No Phyllis Steins are we.

I pretty much figure one of them is the opening shot of SILENT LIGHT (if only because I gave 25 points, and I can't have been the only one to vote for it), but I'm shocked then that either a) the pool sequence in LET THE RIGHT ONE IN or b) the robbery sequence that opens THE MAN IN LONDON *didn't* make the top 20. I though LONDON a cure for insomnia otherwise, but that scene kicks all kinds of cinematic ass.

Finally, someone has had the 'perspicacity' to recognize this shot's essential 'worthlessness.'

(Though you may be surprised to learn that I didn't vote for it myself.)

I may have been the first person-who-hadn't-seen-SYLVIA to whom Theo got to gush about the film, after he saw saw it at FUCK 2007.

I'm afraid I may have come across as a bit of a dick since I made it clear to Theo that he wasn't making the film seem appealing to me and I didn't change my schedule around to accommodate. Since then, I've had pangs of "should I have shifted stuff around."

Having now seen "fully 25%" of IN THE CITY OF SYLVIA, my pangs have stopped. I see no way this movie could have avoided aggravating me. If this scene is typical or the film's method at its best (and the favorable writing about the film leads me to think it is) ... it's all implication and opaque surface without clear point or payoff, or relationship to some intelligible conflict -- a more-naturalistic version of LAST YEAR AT MARIENBAD, in other words (which is not a good thing).

Yes, Victor, I think it's safe to say that Sylvia is not for you. Not a lot of "point or payoff" happening.

Oh, I think the Silent Light shot is lovely and all. I just don't think it's cinematic godhead the way some others do. Plus, out of the context of the entire film, it kind of reverts to being a screensaver, which is apparently what it was in the first place.