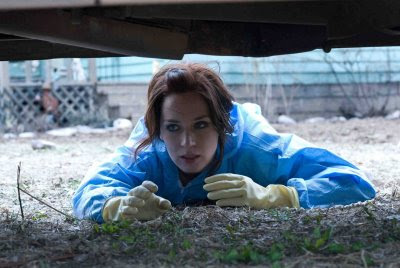 My guess is that a lot of the people reading this have at least one screenplay in progress. Might I make a suggestion? You know that Big Secret you've got lurking somewhere in the third act—the traumatic past incident that retroactively explains your characters' troubling present-day neuroses? Ditch it. Lose it. Nuke it. You don't need it. It doesn't help.

Had I made this plea a year ago, perhaps we might all have been spared the ordeal of Sunshine Cleaning, one of the big-buzz titles in this year's Dramatic Competition. Directed by New Zealand native Christine Jeffs, whose mildly promising debut Rain now seems a distant memory (she also made Sylvia, the inert Plath biopic starring Gwyneth Paltrow), it stars Amy Adams and Emily Blunt, both in reasonably fine form, as hard-luck sisters who start a new business wiping up the blood and viscera that accumulates at crime scenes. The ick factor makes for a few funny moments, but, alas, screenwriter Megan Holley has more serious issues in mind. Both young women seem devoted to their father (Alan Arkin, reprising his labored shtick from that other Sunshine movie), but Mom is nowhere in sight. Might our heroines possibly be working through some personal issues related to the discovery of a bloody, horrific mess? And isn't that conveeeenient. People, this sort of Freudian nonsense is killing narrative fiction. Characters are far more intriguing and memorable when their behavior can't be reduced to the sum of their childhood traumas. Just let them be however screwed up they are; we'll happily speculate about the cause. (Case in point: the underrated Margot at the Wedding.)

Unfortunately, I failed to get into Sugar, which all reports suggest boasts the same impressive degree of relaxed naturalism as Ryan Fleck and Anna Boden's previous Sundance triumph, Half Nelson. [MARCH 2009: Much less impressive, sadly.] But it sounds like the antidote to the Sunshine Cleanings that infest this festival. [MARCH 2009: Still yes, however.]

Also opening this week is Kiyoshi Kurosawa's Tokyo Sonata (60), which was the very last film I saw at NYFF '08 and which consequently became one of last year's inevitable burnout casualties, review-wise. Not that I have a whole lot to say about it now. Interesting to see Kurosawa shift his apocalyptic sensibility to an ostensibly ordinary domestic drama, but I'm basically down with the faction who thinks the lunatic third act is something of a sharkjumper, only partially redeemed by a beautifully judged denouement. Plus I've now seen too many recent movies about patriarchs hiding their termination from their families, even if two of them (Time Out and The Adversary) were inspired by the same real-life incident. Still very much worth your time, of course, and I was startled to realize halfway through that Teruyuki Kagawa, the actor who plays the lumpen husband and father, was also the maniacally pissed-off Japanese prisoner in Devils on the Doorstep. Now that's range.

Also, today I received official confirmation of my Cannes accreditation, so I'll definitely be there. My heartfelt thanks yet again to the many generous folks who made this possible. Your awesomeness sustains me.
Posted by md'a at 11:20 AM

I haven't seen this film, but that particular story structure certainly worked in Exotica. Although the "revelation" was certainly understated.

Kinda. Exotica was about how everyone and everything rearranged when the revelation hit, not the "oh so that's why that dude has issues" light bulb most movies cough up. Mindfuck movies are about presenting revelations in interesting ways; I haven't seen Sunshine Cleaning either, but the whiff I get from Mike's review makes it sound like A + B and wait till the script finally doles out C. Exotica made me feel like the entire movie was about its Incident, even though that incident is never onscreen. We know Bad Stuff Happened, what makes it interesting is how it connects the characters (not simply that it does).

Thank you thank you thank you for pointing this out. Remember that Scottish movie from a couple years ago, RED ROAD, where she spends the whole movie alluding to some sort of deep trauma in her recent past, and at the end, it gets revealed, and it's pretty much right on par with what anybody would have figured, but it really doesn't add anything to the story because by the time of the reveal all we really don't know is what precise form the trauma took, and it really turns out that it doesn't matter what precise form the trauma took?