A few quick thoughts about Duplicity (78). 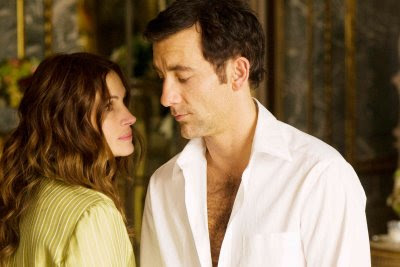 Unfortunately, I'm not assigned to review Duplicity, as both The Class and Che happen to open in Las Vegas next week. So I may as well make my case here (in speedy bullet-point fashion), especially since there are zero reviews out at this writing and I honestly have no idea what the consensus opinion is likely to be. That this film is less overtly weighty and much more twisty than Michael Clayton suggests to me that it's doomed to be underappreciated, but I hope I'm wrong.

• More than anyone else in Hollywood right now, Tony Gilroy understands how to open a movie. No throat-clearing, no "establishing"—he just tosses you in and trusts that you'll enjoy swimming out. His in medias res approach here isn't nearly as Wait WTF? as Tom Wilkinson's lunatic monologue in Clayton—he saves the real cognitive dissonance for a flashback in Rome about a third of the way through—but it's still immensely satisfying in its confidence and chutzpah, and he gets a look from Julia Roberts just before cutting to the title sequence that essentially summarizes his theme in a single glance.

• Speaking of the title sequence: legendary. Beyond inspired. I don't want to say any more for fear of ruining the experience for people (though you can see a little of it in the trailer). But already I was thinking, "Wow, this guy is a goddamn filmmaker," which I didn't really get from Clayton except in snippets (e.g. the deer). My Skandies Best Scene favorite is pretty much locked.

• As you probably know, the subject is corporate espionage. But as in all the best films, that's strictly a cover, and Gilroy isn't especially subtle—nor need he be, given the glossy-entertainment mode in which he's working—about using it as a sweeping metaphor for issues of trust in a romantic relationship. In fact the film has a unique structure in which it periodically shifts directly from text to subtext, with the latter rising upward in repeated flashbacks that seem expository but rarely actually are. At the same time, Gilroy can't resist giving his lovers dialogue that stresses how their profession makes them different from other people—he's playful enough to create an obvious metaphor and yet pretend to offer plausible deniability. But the central question here is still potent and unanswerable, which is to say absolutely perfect for drama: Given that almost every relationship is founded on lies (if only because courtship involves magnifying advantages and suppressing/hiding flaws), how can we proceed once we've determined that our inamorata is every bit as full of shit as we are? And how certain are we that this person we've chosen as a partner really has the same agenda that we do?

• Unfortunately—I almost want to say "tragically"—Gilroy allows his exceedingly clever plot to undercut his theme in the home stretch. The movie reaches what could have been a tremendously satisfying conclusion (it's the scene in the airport, which you also see a little of in the trailer: "Would it make any difference if I said I love you?" "If you said it or if I believed you?") and then proceeds to one final rug-pull, which turns out to be one too many. I actually quite like Gilroy's idea considered in a vacuum—it's a really bold choice, especially for a big mainstream film like this one—but in context it makes hash of the emotional stakes he's worked so hard to raise, so that the film now seems as if it's actually just about corporate espionage after all. (It also raises a few retrospective-logic questions, one in particular regarding Tom McCarthy's character.) I can see someone making the case that the very last shot restores that sense of troubling humanity—that's certainly Gilroy's intention—but it didn't quite work for me, I'm afraid.

• That big reservation aside, if the average Hollywood film were even half as consistently smart and witty and assured as Duplicity, I would never leave the Times Square multiplexes. There's not one wasted scene, not a single unmemorable supporting character. Gilroy scatters lovely and/or hilarious grace notes everywhere, from Roberts demanding that Owen rehearse their upcoming performance minus his robe to the alternate scheme that never quite happens (involving frozen pizza) to Clive Owen's New York associates performing dueling impressions of his crisp British accent. ("I own you." "I own you.") Even more than in Clayton, Gilroy just nails old-Hollywood effervescence, reminding you what a big star vehicle with a crafty Byzantine plot is supposed to look like. He's at once pioneer and throwback, and reason for hope.

So no GG comedy/musical noms for the two leads ?

just saw it, loved it, and a great write-up... wanted to get an idea out of my head here: i understand your dismay at the 'final rug-pull'... maybe it's just my current state of mind, but I read the movie as profoundly humanist and anti-corporate, and I think the end has a clear purpose to that effect.

For me, maybe the key scene of the whole film was Wilko's ever-so- slightly deranged bit about corporate evolution trumping human evolution. one might dismiss it in retrospect as it being part of 'the play' but I thought it pretty authentic and it put me into seeing the 'corporate relationship' (the dysfunction between Tuly and Garsik) as a mirror of Ray & Claire's 'human' one...

In other words, Tully and Garsik and all they represent are so invested in their dehumanized world that the only way they can relate to one another is by either childish brawling on the tarmac or lurid, Byzantine backstabbing... the same sort of thing that Ray & Claire can't quite get over, get around.

The 'final rug-pull' has to be there, I think, to assert that the corporate ideal has won, is dominant, etc. in this case -- so that viewers see it not just as an extension our own flawed human nature but rather as a perversion (or exploitation) of it.

Just returned from this, and wanted to add that, for as much as Gilroy talks in the New Yorker piece about the novelty of his reversals, the corporate plot smacks of Joseph Finder's airport-bookstore potboiler Paranoia, down to the switchback nature of the mastermind's MacGuffinry, plus the Kathleen Chalfant character altogether.

I liked it, didn't love it, though I agree about the little character moments (the "I own you" scene you mentioned was probably my favorite moment of the movie). I thought the title sequence was really pretty dumb, actually, and seemed even dumber after the fact, once we realize it has no actual significance, but is strictly emblematic (in the least subtle way possible).

Yeah, I think Gilroy is here to stay, if he can keep getting the budgets for his globetrotting urges. Loved the bit with Giamatti in the bowling alley ("Any sport that puts a limit on your high score..."), so while I was a big fan of M. Clayton, I'm even more glad to see Gilroy's also got a sense of humor. We need waaayyyy more smart comedies nowadays.

i wouldn't say the title sequence was dumb, I loved it... but it's certainly meant to heighten the theme of dysfunctional relationships, and (see post above) how the nature of corporations has disassembled our ability to relate and trust etc etc. yeah, it was a pretty brilliant scene, sorry. :-)

The fact is ... the film is full of little touches like that line of Giamatti's about bowling scores that mean more than they seem to. Donald Trump once said about wealth that, after a certain point, it's just keeping score. If you were to give me, say, $5 million, I could certainly use it in a meaningful way. But give me, say, $40 or $50 million ... I really would be at a loss what to do with it. And push it to the 9-digit numbers ... I don't have any real (i.e., non-abstract, non-mathematical) concept of those numbers, much less a sense of that kind of wealth. It'd all be just a form of scorekeeping. Giamatti's remark about bowling have a maximum score (plus the continuation ... something like "millions of ordinary schmucks have bowled 300, what'd make me better") is an indication that he is a man with no such sense, a man for whom the very notion if limits is a-priori and per-we unjust.

Bravo. Bingo. Nailed it. This is where the magic happens:

"...a sweeping metaphor for issues of trust in a romantic relationship. In fact the film has a unique structure in which it periodically shifts directly from text to subtext, with the latter rising upward in repeated flashbacks that seem expository but rarely actually are. At the same time, Gilroy can't resist giving his lovers dialogue that stresses how their profession makes them different from other people—he's playful enough to create an obvious metaphor and yet pretend to offer plausible deniability."

I consider a good film review to be one that alerts you to subtleties you might've missed. A great film review can be read again *after* seeing a film to further savor the memory of those subtleties. Kind of like reminiscing. You write great reviews.