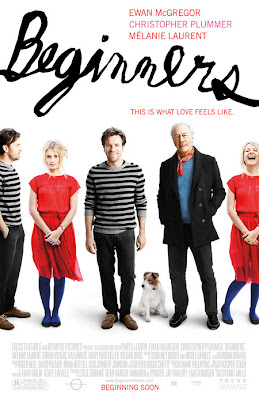 Super-awful CAM quality. Still not as painful as the scene itself, however.

Godard failed to place for In Praise of Love or Notre Musique.

Gleeson gets his fourth nod, having previously placed 11th for The General (1998) and twice in Supporting: #15 for 28 Days Later (2003) and #9 for In Bruges (2008). Likewise Gosling, though all of his previous appearances were in the lead category: he won Best Actor in 2006 for Half Nelson and also finished at #8 for The Believer (2002) and at #6 last year for Blue Valentine. Mara, too, makes it two years in a row, having squeaked in at #20 in Supporting for The Social Network. Ehle is new.

Belvaux's screenplay for An Amazing Couple placed 14th in 2004.

I hope you mean the scene is painful emotionally, and not painfully bad!

Alas, I'm sure you mean the latter. *sigh*

Good job 4 other people giving points to BEGINNERS. With the results the way they've been thus far, I'll take whatever support I can get. (I gave it 16 pts).

I'm surprised BEGINNERS is so low. What are the objections to this movie? I only had one: it plowed through its natural ending and went on for another 10 minutes or so.

Skandies are more than 25% done and I have yet to see any of the cited best actress performances. This is sad.

I like BEGINNERS a lot, but Remembering Dad is a lot more vivid than Romancing Melanie. The love story half is a little too (500) DAYS OF SUMMER.

I can see what you mean, but I thought that the two different sections complemented each other nicely.