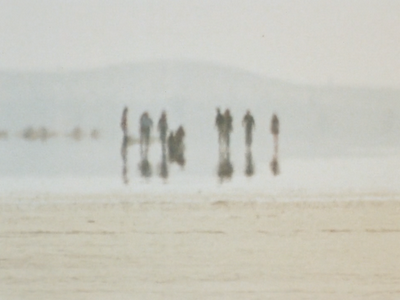 Revisiting this gloriously anarchic, ceaselessly inventive bliss machine (which I saw bits and pieces of a gazillion times in first run, working concessions at a multiplex where it played) made me realize how un-daffy—or perhaps un-Daffy—American film comedy has since become. "Wait," Pee-Wee tells escaped convict Mickey as they approach a phalanx of cops, "I have an idea"...and five seconds later Pee-Wee's in full drag while Mickey sports a false mustache and beard along with nerd specs. It's funny because it's impossible, but I'm trying to think of the last mainstream comedy that chucked realism out the window, and I'm coming up blank. That Big Adventure's star ("as himself") is such a singular creation obviously helps, but Reubens still couldn't save Big Top Pee-wee—he needed Burton's loopy visual sensibility (most evident in the stunning sequence right after Pee-wee's bike is stolen, as every cyclist in town converges on our despondent hero), plus general indifference to the gag-killing constraints of the real world. Claymation ghouls, Rube Goldberg cookery, biker gangs seduced by a man-child's chicken dance, James Brolin—nothing's too ludicrous. Only during the climactic backlot chase scene does the energy flag a bit, and even that has multiple inspired moments, e.g. Dee Snider dodging Santa Claus and Godzilla, both of whom are being towed by a speedboat. Just a nonstop delight, really. Also, checking the film's Wikipedia page, I see that it was released on 9 August 1985. I lost my virginity, if memory serves, sometime around September or October of 1985, to a coworker at the multiplex where it was then playing. Why? What's the significance? I DON'T KNOW!!

With Arcand's continuing relevance at best questionable, Falardeau seems to have become the leading French-Canadian filmmaker more or less by default, which makes it dispiriting that each of his films has been more conventional and less distinctive than the last. Here, of course, we have an entry in the inspirational-teacher genre, and to the extent that it follows that model it's without much interest; Lazhar's a nice enough fellow, devoted to his pupils and endearingly awkward on date night with a colleague, but his methods are fairly banal and his tragic backstory an unnecessary distraction. (I did like that he lies about having smacked one of the kids upside the head, however, and that nothing ever comes of it—just an everyday ass-covering.) What really compels is the reason for Lazhar's presence in the first place, which I didn't know in advance and am loath to reveal now, just in case some of you are still ignorant. Falardeau's handling of what we'll call the prelude is a thing of beauty, with masterful use of the school hallway; hearing the other kids noisily enter from behind the camera as it stares impassively in the other direction, at the empty passage where Simon ran off (and from which a teacher now comes hauling ass to intercept them), served as a potent reminder of the kind of effect that only cinema can truly create. And the subsequent exploration of how something like that would affect a class of eight-year-olds, plus the fallout of the paranoid dictum that any physical contact whatsoever between adult and unrelated child is inappropriate (NOTE: aforementioned spoiler isn't what you now assume), is all quite solid. Even though it was adapted from a one-man play, however, the film seems wholly misguided to focus so intently on Lazhar, who more often than not comes across as if he's Bogarted an ensemble piece. Falardeau deserves credit for expanding it, but he didn't evidently have enough courage to just chuck the Stand and Deliver template altogether.

Doesn't work for me as comedy or as pointed satire, and watching it now I feel like a contemporary remake would probably star Adam Sandler (with Will Ferrell as Custer). Jokes are mostly predicated on feeble reversals of expectation concerning propriety: Crabb's sister plainly yearns to be raped by Indians even as she feigns terror; Dunaway's proper lady all but molests him while prattling about righteousness and purity; his wife's widowed sisters demand his attentions via ostentatious coughing fits from adjacent beds; etc. And while the film boldly identifies with the Native Americans, depicting U.S. soldiers as villains, those good intentions are hamstrung by the subtitle-averse era in which it was made, which forces Chief Dan George and the others to speak in stilted Hollywood Injun (without having the stones to also write Crabb's dialogue that way when he's meant to be conversing in Cheyenne). Hoffman seems to be having a good time but never quite establishes an actual character, even allowing for the extent to which that could be construed as intentional—too often he just comes across as Benjamin Braddock in the Old West, anxious and gauche. His ancient-man makeup and voiceover, on the other hand, seem like a purposeless stunt in this context (and possibly in the novel as well). Why set the story in the present and frame it as the recollection of a 121-year-old if you're just gonna ignore everything that happened to the guy in the century between the Battle of Little Bighorn and now (= 1970)? What does the tale gain when told by the world's oldest man, and/or at such a great remove? (I didn't love the framing story in Titanic, either, but at least it kind of made sense given the expedition to the wreck and the Heart of the Ocean subplot.) Final shot of Hoffman encased in latex and holding one gnarled hand to his forehead, as if no longer able to bear the sins of the world ("That was some fucked-up shit a hundred years ago, when I was like 22"), just prompted a derisive snort.

"Okay, I know the whole grumpy-dude-gradually-softens-when-saddled-with-adorable-kid thing died of overexposure a decade ago, but hear me out. I have a twist. You ready? Also: the kid's mom. She's there too. And he warms up to her as well, through the adorable kid. Right? I know. Has anyone made their grumpy dude grumpy because of some sort of failed relationship with a child of his own? How crazy resonant would that be? I'm thinking very short, very simple, like no more than 80 minutes long, and we spend 40 of those minutes just establishing the grumpiness. That way we get familiarity and repetition. It's a movie everybody's already seen a dozen times and it's half over before anything of interest happens. Look at my arms, I have actual gooseflesh."

Fortuitously appears on my master alphabetical list right beside This Is England, which could serve as an alternate title. As ever, cinema isn't the ideal medium for a story that spans 20 years—a problem exacerbated here by Coward's highlight-reel structure, with the film (and the source play, presumably) leaping from one isolated Event to the next: General Strike, Charleston craze, wedding, sudden death, etc. Individual scenes, however, are often quite strong, especially those involving Kay Walsh (who I didn't realize was then Mrs. Lean) as the headstrong, magnetically irritating Queenie. Despite his reputation as an urbane wit, Coward excelled at frankly realistic middle-class courtship behavior; Queenie's prolonged pseudo-romance with Billy strikes some of the same deeply rueful notes that would make the following year's Brief Encounter an enduring masterpiece, while ably distinguishing between the impetuousness of youth and the resignation of late middle age. But every time I started getting emotionally involved, the film would fade out and then fade in several years later, usually shifting focus to somebody else altogether. And there really isn't much of a throughline apart from the general resilience of the English character (explicitly compared at one point to a garden)...which, while not propaganda per se, serves more or less the same reassuring function as the domestic material in In Which We Serve. Hollywood films made during WWII aren't nearly as uniformly we-are-fam-i-LEE, are they? I don't feel as much need to recalibrate based on what was happening offscreen.

Summer, 1989: "What'd you think of Batman?" "I liked everything except Batman." Same deal here, surprisingly, as Punishment Park itself represents leftist outrage at its most didactic and shrill—in stark contrast to the tribunal sections, in which both accusers and accused appear recognizably human (which is to say, occasionally coherent but mostly idiotic). I gather that's because Watkins typecast everybody and allowed them to improvise, thereby creating the live-action equivalent of a heated combox "debate"...but whatever the method, it affords both sides respect even as it (inadvertently?) subjects both sides to ridicule, illuminating the practical difficulty of communicating across such a wide ideological gulf. One of the inquisitors is even smart and savvy enough to be Victor Morton, quoting Thomas Aquinas on the definition of a just war and continually insisting on specifics rather than generalities. Out in the desert, though, it's eye-rolling time, starting with the very concept of this alleged "training exercise" for law enforcement—we're told it's been implemented in part because prisons are overcrowded, but any prisoner who doesn't win the game ends up behind bars anyway (assuming they surrender), and it's abundantly clear by film's end that nobody is ever allowed to win. Are we meant to believe that the government deliberately sends dissidents out there anticipating that they'll give the cops justifiable cause to kill them? That's just laughably bwahahahaha given that we're in some version of the real world and not a Verhoeven-style dystopian future. And why does the camera crew go apeshit when prisoners are gunned down (invariably in circumstances where they ignore—or in one preposterous case allegedly don't hear—direct orders to stop), but not even blink when a couple of cops are flat-out murdered early on? As filmmaking, this is exciting stuff, quite formally audacious (especially for its time), but the deck-stacking rankles even for a bleeding-heart like myself.

I'm pretty much in agreement with your review of Monsieur Lazhar.

I can't agree with this, however: "With Arcand's continuing relevance at best questionable, Falardeau seems to have become the leading French-Canadian filmmaker more or less by default [...]"

By "leading" I didn't mean "greatest." Somebody not widely known can't be his country's leading filmmaker by definition, no matter how good he is (I'm unfamiliar with Jean myself). Dolan's only made two films—we'll see how his latest fares at Cannes—and Lafleur hasn't yet made much of an international splash. You could make a case for Côté, but I think Lazhar's Oscar nomination trumps him.

Yeah, I wasn't sure what exactly you had in mind by "leading".

If it's only/essentially knowledge by the general public, I'd argue then that Denis Villeneuve is probably the biggest name. (To me, he's a competent filmmaker, but not much beyond that.)