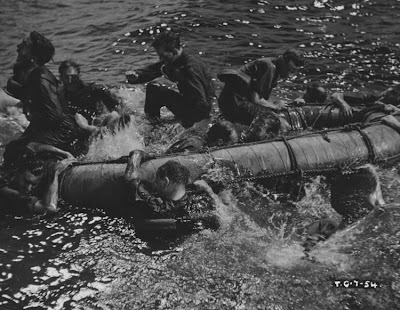 Finally. (Another case where I waited close to 20 years for a print to turn up near me.) Thought this was a total bust for a while, but it gets funnier as it goes along, culminating in a glorious finale ("teach it phenomenology") that anticipates Douglas Adams at his loopiest. Still, it's plainly a student short that's been padded out to feature length, and there's virtually no sign of the compositional magnificence Carpenter would demonstrate in Assault on Precinct 13 just two years later. In particular, the extended sequence involving the alien beach ball (which I gather was part of the padding) really feels like amateur hour, the kind of prankish tedium that's thankfully restricted to YouTube videos nowadays. Performances are shall we say "variable," with O'Bannon both the most stilted and the most comically inspired (his video diary kills, though that's partially just the succession of bad hair days); production design ranges from inventive to desperate, frequently within the same shot. By far the most distinguished element is Carpenter's score, which isn't in the same league as Halloween or Big Trouble in Little China but still suggests that he could have carved out a career strictly as a composer had directing not worked out. (And it no longer seems to be working out, so...) All in all, more of an amusing footnote than a real movie, but I'm glad I finally saw it. Also, is it just me or was Sgt. Pinback the tonsorial template for Joaquin Phoenix in I'm Still Here? The resemblance is uncanny.

Achieves tremendous power in its final scene by abruptly shifting focus, revealing that the film is in fact about the sacrifices parents make for their childrens' happiness. However, Noriko's dilemma, which occupies the vast majority of its running time, feels so alien and abstract to me that I'm somewhat detached until those last couple of minutes. No matter how much you love and are devoted to your dad, it's just plain weird to feel no desire for an independent life; Late Spring pronounces this misguided but doesn't seem to recognize it as pathological, and whatever exploration of Noriko's psyche may exist in the source novel doesn't come across in Hara's performance, which at its best is productively opaque. That specific reservation aside, Ozu's sensibility ultimately may just be too sedate for my taste—I've seen most of the acknowledged classics now and have never been wowed, not even by Tokyo Story (though it's been a long time since my last viewing). What I do find arresting is his unorthodox use of inserts, which imbue inanimate objects with a sense of mystery that seems well out of proportion to their narrative context. The midnight vase here is the most blatant example (and much remarked upon, it seems), but even more striking to my mind is the scene in which Hattori, who's invited Noriko to attend a concert with him and been politely rebuffed (due to his engagement to another woman), sits at the performance beside an empty seat. Ozu's cut to an insert of Hattori's hat and briefcase on the seat provides no additional information—you'd have to be pretty dense not to have already processed that he's there alone—yet it somehow imparts a momentous sense of loss. At moments like these, "transcendental" does seem appropriate...but they're fleeting moments that don't wholly counteract the mild engagement I otherwise tend to experience. (Exception: his silents.) Same deal as with Yang's A One and a Two..., basically; maybe one day I'll mature enough.

C'mon, at least try to work out the implications of your fantastical premise. Anticipate the viewer's questions/objections and address them. It's not that hard. Like: What exactly does it mean to say that a creature "can't die" so long as its asphyx is trapped? What if you just plain incinerated the body until there was nothing left but ash? Is the pile of ash still alive? What if you then scatter the ashes? Does each individual particle still possess consciousness? Even if you can't think of good answers, it's still smart to have the characters make a good-faith effort to hash it out, so that we're not sitting there the whole time thinking "but...but...but..." Likewise, the whole bit with the guillotine is just nonsensical—does the asphyx simply not appear if a person isn't aware of their impending demise? (The son who smacked his head into the tree branch didn't appear to be, still got a smudge.) Could you just run at the person with a spear in super slo-mo? That seems like pretty much the same idea as letting the blade fall slowly, with less likelihood of a fatal accident. Maybe I wouldn't have fixated on this stuff had the film's surface been more alluring, but the cheese factor is alarmingly high, with Robert Stephens hamming it up in a deadly serious, no-fun manner (I didn't care for him as Holmes in the Billy Wilder movie, either) and the asphyx itself looking like rear projection of an SNL-era Muppet withdrawing from heroin. Newbrook directs like the cinematographer he was, with zero sense of how to build a rhythm—even the present-day prologue falls completely flat, since we don't yet have enough information to comprehend its significance and Newbrook stages it as if it were the last scene in the movie instead of the first. Line of dialogue I can't believe somebody actually typed: "But why pursue immortality?!"

Not bad for wartime propaganda—in many respects it plays more like postwar reflection along the lines of The Best Years of Our Lives, emphasizing domestic uncertainty as much as battlefield bravery. (Can you use the word "battlefield" if it's planes vs. boats? Can't think of an alternative.) Upper lips are at maximum stiffness throughout, to somewhat stultifying effect, but the tone is so quietly sober that there's little sense of being rallied; the Captain's addresses to the crew come across more like Kevin Spacey in Margin Call than like Henry V at Agincourt, even as Coward proves more commanding than you'd expect. I'm a stickler for structural integrity, though, so it bothers me (perhaps more than it should) that the film clearly establishes the flashbacks as personal memories and then discards that idea when it becomes inconvenient, e.g. when it wants to show us family members killed during the Blitz (obviously unobserved by anyone on the ship). And that quasi-rigor can't quite disguise its essentially anecdotal nature, which works fine in individual scenes but doesn't exactly create the sense of urgency the subject demanded smack in the middle of WWII. It's the ol' fish/fowl problem: As drama, it's hamstrung by patriotic fervor, but at the same time it seems way too diffuse and low-key to reassure a battered nation. Occasionally, though, the balance is exactly right—I found myself moved to tears by the drawn-out simplicity of the final scene (barring epilogue), in which the Captain bids farewell to his reassigned men, shaking hands with each and calling him by name. Rather than dissolving to suggest duration, or cutting in late to give us only the most significant characters/actors, Coward and/or Lean holds for the entire procession, affording every sailor equal weight. Reminded me of brushing away tears for months in 2001 reading Portraits of Grief in the New York Times, which insisted on remembering every victim.

Reviewed for Las Vegas Weekly, and I have nothing much to add in terms of content; if your documentary does nothing except state the blatantly obvious ("kids being mean to other kids is bad and something must be done!"), please air it on some educational channel where it belongs. But I'm truly curious about the focus issue, especially now that I've skimmed a bunch of reviews and can't find another that so much as mentions it in passing. I'm almost positive it's in the film itself and was not a projection error, as I know what those look like. And it's incessant. Roughly every two or three minutes on average, I'd estimate, and often in shots that are completely static (so it can't be auto-focus gone wild). Abrams' lens flares are nothing compared to the number of times Bully blurs out for a few seconds and then resharpens. Not shifting focus to another element of the shot, understand—just a brief purposeless undulation on whoever's front and center. And it's so gauche that it's either some kind of deeply misguided aesthetic strategy (in which case I'd expect it to be in the press kit and hence crop up in the reviews) or evidence that Hirsch literally did not know how to use his camera. Anyway, if you see the movie after reading this, could you look for it and then come back and confirm that I'm not insane? I'd appreciate it.

Just wanted to remind myself what a great Cronenberg film looks like before I'm inevitably disappointed by Cosmopolis next month. He really brought it all together here—hate to use that awful word "mature" (especially since he quickly regressed), but he genuinely seems more interested in Elliot and Beverly as complex individuals than he does in, say, the gyn(a)ecological instruments for operating on mutant women, which are merely a disturbing symptom of Bev's mental breakdown. Irons' astonishing dual performance, which is so acutely realized that you can immediately tell without any context when you're looking at Elliot posing as Beverly or vice versa (at least until they start to meld), functions both as an abstract portrait of curdled symbiosis and as an intimate character study of two people with almost nothing in common apart from a genome and mutual need; their trajectory is legitimately tragic, and so richly imagined that not even the standard junkie nosedive can render it generic. What's more, with the exception of one virtuoso walk-and-talk that looks ever so slightly composite-fuzzy, the effects work is so subtle and the compositions so meticulous that you simply accept what you're seeing and stop looking for the seams. That's a minor triumph in itself, as well as further testament to Irons' magnificence. (Who beat him for the Oscar again? [Pause.] Holy fuck he was not even nominated. Though I do remember he thanked Cronenberg when he won two years later.) You could combine the eight features since, from Naked Lunch through A Dangerous Method, and still not amass one-tenth of the heart-rending humanity captured in this film (and in The Fly)—it's as if he scared himself and decided to double down on the trademark new-flesh queasiness, to speedily diminishing returns in my personal opinion, and yeah I know you all loved History of Violence but I stand by my underwhelmitude. More sadness: Between this film and The Moderns, Geneviève Bujold was maybe my favorite actress in the world that year; I've seen her in exactly two films since, the most recent one 14 years ago. What the hell, everyone making movies featuring strong adult women for the last two decades?

I was hoping this meant there was a Dead Ringers R1 Blu-Ray. Drat.

I feel even less guilt about pirating foreign Blu-rays.

In that case, you should give Make Way for Tomorrow a whirl. Saw a used copy of the Blu in a store the other day and was heartbroken when it turned out to be European. Best sad movie ever.