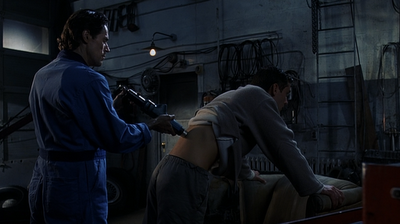 Feeling massively guilty about bailing on this one—partly because Wang himself sent me the film and asked me to look at it, partly because its heart is so evidently in the right place. But it's nearly three hours long and what I saw just didn't excite me. Wang deftly deflects the more melodramatic aspects of his scenario, but he does so via methods that are kinda indie-shopworn at this point; I thought he had me in the hospital, when the nurse offers Joey a visitation form (relieving my fear that I was in for an epic of casual homophobia), but then the doctor shows up to deliver the awful news and Wang instantly cuts to a shot from outside the building, consigning the remainder of the scene to respectful silence. And then the first post-funeral scene is like seven minutes of near-catatonic pseudo-naturalism, with Joey going through a giant stack of mail (in complete silence, natch) while the kid, who's too young to fully grasp what's happened, never once intrudes upon his sorrow. It just looked constructed to me, while trying really hard to look unconstructed, which is an off-putting combination. Sorry, Patrick. You have Ebert!

Suffers from exactly the same problem that Dollhouse initially did: intriguing ideas shoehorned into a poorly executed genre framework. (As a bonus, it also has Fran Kranz starting out insufferable.) In this case, the ideas are breezily meta rather than terrifyingly insidious, so the damage isn't as pronounced...but I still wish the cabin material wasn't quite so generic, even as I fully understand that it's meant to be generic, indeed must be generic on some level for the premise to make any sense. Jules making out with the stuffed wolf head during Truth or Dare, just for example, manages to be distinctive and memorable (and scary! remember scary, guys?) without betraying Robin Wood or Carol Clover. And while the scenes "downstairs" are often darkly funny, I feel like the idea would have worked better without them. Or maybe without the cabin, shown only from the puppeteers' perspective (though that's so intensely lab-rat that you've lost most of your audience). Cutting back and forth between the two, as Whedon and Goddard opted to do, is the most conventional and least challenging option, and also a lot less fun—the film isn't anywhere near as WTF? as it ideally ought to have been, and actively squanders some of its best moments. (Why tell us at the outset about the electrified fence, so that we're just sitting there waiting for Hemsworth to ride into it? That's inept, frankly.) As for semiotics, only the party downstairs, with the staff whooping it up while Dana gets beaten to shit on monitors in the background, productively complicates our relationship to horror films, and even that fleeting implication is Haneke-Lite. Still amusing, with a gratifyingly bugfuck all-star monster finale, but I prefer my genre deconstructions a little less self-conscious and self-satisfied. And those redneck torture zombies are dull.

Don't mean to be glib, but who would ever play this "game"? Apart from the film's one standout scene—the Chinese Restaurant and its grotesque "special"—there's nothing even remotely fun or enticing about its virtual reality; even if we accept the ludicrous idea of a game narrative about a rock-star game designer (which of course is really Cronenberg's effort to hide one layer of simulation), everything's so unpleasantly banal that it's hard to imagine slogging your way through it. This time I watched knowing for sure that Allegra and Ted are game characters from scene one, but that understanding didn't make their vapidity any more compelling. It's an empty sort of cleverness: "Ah, yes, these performances faithfully represent the inherent limitations of an avatar." "I see, that inelegant jump forward [from the assassination attempt in the opening scene to Ted driving Allegra into the country] mimics the way that video games simply proceed to the next level." It's all deftly worked out but leaves you with nothing to connect with—much the same problem I had with Inception, actually, which similarly creates multiple "worlds" that are all equally weightless and expository (and concludes on a similarly exasperating live-or-Memorex? note). Some of Cronenberg's outré visual ideas are good for a laugh—awesome that he got Ted rimming Allegra's bioport into mainstream movie theaters—but without a rich, immersive context they come across as pandering, just the biomechanical equivalent of the girl taking her shirt off. I can't help but notice that The Fly and Dead Ringers, the last two Cronenberg movies I truly loved, were both co-written by him with others; neither of those collaborators has anything else decent to his name, but maybe DC just needs someone to shape a proper story.

Pointed enough that it would really have struck a nerve had they done the unthinkable and actually cast Puerto Ricans as Maria and Bernardo. Sondheim's wholesale rewrite of the lyrics for "America" lends the Sharks significant stature—amazing to think that civil-rights-era audiences flocked to a film (and snapped up a soundtrack album) featuring couplets like "Life is all right in America / If you're all white in America"—and Detective Schrank, in a speech that I'm pretty sure wasn't in the stage version, openly sides with the Jets in a fashion so ugly that you'd have to be a dyed-in-the-wool, out-and-proud bigot not to recoil. All of which makes its modernized recapitulation of Romeo and Juliet seem more urgent, less like a typical theatrical stunt. Throw in Bernstein's majestic pseudo-jazz score, Robbins' defiantly balletic choreography, Wise's robust New York location work, and the professional debut of the greatest lyricist the world will likely ever know, and it's hard to go too far wrong. However, the show does suffer from the same problem that afflicts almost every Broadway musical: it's massively frontloaded, with Act Two getting bogged down in obligatory plot resolution (not why we came) and featuring all of the weaker numbers ("One Hand, One Heart"; A Boy Like That"—admittedly the former was in Act One onstage, but so was "Cool," so call it a tradeoff). Plus I've never understood why you'd bother setting up the traditional Romeo and Juliet ending if you're gonna have Maria show up right before Tony successfully commits suicide-by-Shark, and then let her survive. Subverting the tragedy to some degree is fine, but to what end in this instance? Final shot, while evocative, sees the entire cast just slowly walk out of the frame, as if not sure what they're doing there anymore.

Previously addressed at TIFF '11, though I somehow failed to mention the most eye-rolling aspect of the narrative: that Brandon's sexual dysfunction so clearly stems from his incestuous desire for Sissy, to the point where Fassbender actually clutches his head in agony when Brandon overhears Sissy fucking his boss. (I love the guy generally but can't fathom how this overripe performance got so much love from the discerning Skandie crew.) Broad strokes are so inept that it's not at all hard to believe Shame was co-written by the same person responsible for The Iron Lady; at the same time, though, it works beautifully in isolated patches. Last time I singled out the credibly awkward dinner date (and marvel again now at the supremely awkward non-kiss as they part, which is the sort of painfully truthful aspect of dating you almost never see in movies), whereas the standout this time was Brandon's boss hitting on the girl at the bar, which perfectly captures her amused exasperation at his overbearing antics (and lets Fassbender be still and watchful, which he's much better at than crumpling to the ground in the rain and wailing). McQueen still seems to me a superlative filmmaker in search of something to say; this was probably the worst subject he could have chosen.

It is not *remotely* clear that "Brandon's sexual dysfunction so clearly stems from his incestuous desire for Sissy" -- or whether the reverse is true, or whether the two have a common cause. I'd even argue that the nature of Brandon's feelings toward his sister is ultimately ambiguous, though the movie does float the idea of an incestuous attraction. In any case, the film has zero interest in specifying a cause for Brandon's problems, and I think your interpretation is willfully reductive.

Now I regret deleting the phrase "The film's fans tend to staunchly to deny this, but..."