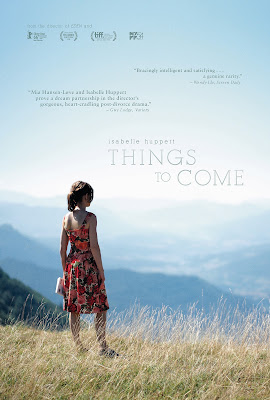 
(This is the end of the movie, so, y'know, spoilers and whatnot. Also NSFW-ish, and a scene that kind of requires the full context of the movie for proper impact.)

Cotillard* was the Skandies' Best Actress winner in 2014, for Two Days, One Night. She also placed 4th that same year for The Immigrant. Plus: #11 twice (for La Vie en Rose in 2007 and Rust and Bone in 2012), and #14 in Supporting (Public Enemies, 2009). Grant makes his first appearance in 14 years, having previously finished 9th in the lead category for About a Boy (2002) and 17th in Supporting for Bridget Jones's Diary (2001). Lerman and Kim are new, though the latter is also in play this year for her lead (?—people disagree) role in Hong Sang-soo's Right Now, Wrong Then.

Desplechin has placed twice before in Screenplay: 8th in 2005 for Kings & Queen and 6th in 2008 for A Christmas Tale (written with Emmanuel Bourdieu). Peyr collaborated with him once before, on Jimmy P., but that film wasn't terribly well received; she has no other Skandie-eligible credits.

Category fraud: Grant and Kim are leads, in my opinion. (Both of them received votes in both categories.)

* The individual who initially voted for "Angelina Jolie, Allied" shall remain nameless.
Posted by md'a at 10:14 AM

Hansen-Løve seems to be one of those directors whose small coterie of ardent fans in the AVB just manage to get her on the scoreboard. Father of My Children placed 17th and Eden placed 20th. I'm curious to see whether she eventually makes a film with wider appeal. Maybe even one that would appeal to me (though I do love the first half of FoMC).

Celebrating 48 years of not being a robot.

Or maybe Fiennes dancing in A BIGGER SPLASH, Rita from TOWER or an EWS!! scene

(Already regretting the fifth pick, esp. now that I've just remembered the ending of THE FITS and "Would that..." in HAIL CAESAR!)

Hansen-Love seems to make movies that *just* miss with me. I can see where a great movie exists in this material, but everything seems held back. The word I keep using is "muffled."

Expecting the epilogue to HELL OR HIGH WATER to do well. But maybe not top-5 well.

Scene winner (or should be):
Killing Janet, The Good Place

Okay, ahem, I'm pretty sure LNG has the top three right, although I'm not as convinced about the order.

I made a lot of mistakes on my ballot this year, which is odd because I keep an ongoing spreadsheet where I mark down scenes and performances that might make my year-end Skandies ballot, and I do it as soon as I watch a new movie throughout the year. Yet still I managed to snub Kim (for this, not for RNWT, even though she's good in that too) and "Would that it were so simple" which was just a total brain fart. That scene will place high, but no thanks to me.