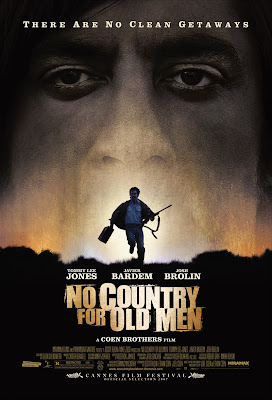 [Edited slightly for reasons too tedious to get into, and I still can't get the aspect ratio right on this film.]

With No Country for Old Men the Coen Brothers set a new record for most nominations in both Director and Screenplay, with four in each category. The three previous films: Fargo (#3 for both); O Brother, Where Art Thou? (#5 Director, #4 Screenplay); and The Man Who Wasn't There (#3 for both again). Thought they had this year's victories in the bag as recently as October, before PTA's film—shot in the same location, ironically—made its premiere.

More records! Kidman and Blanchett both tie Billy Bob Thornton at four career nominations. This is the third time Kidman has placed in the Best Actress runner-up slot—previously for Eyes Wide Shut (1999) and Dogville (2004). She now has eight top 20 appearances in total, putting her second on that list (though well behind Philip Seymour Hoffman's 11). The others: 6th for Moulin Rouge (2001), 9th for The Others (also 2001), merely 9th for her Oscar-winning performance in The Hours (2002), 11th for Birth (2004), and 18th for Birthday Girl (2002). That she came in second this year, for a deliberately off-putting performance that generated few waves elsewhere, is a pretty good indication of our collective jones.

Blanchett now has a total of seven appearances, putting her fifth on the all-time list. (3rd is Kate Winslet, 4th is Edward Norton; I break ties based on how high they finished on average.) Her rundown:

Affleck we saw make his first appearance back at #7. (Good job August Voting Body putting him in the correct category for this performance.) Russell, meanwhile, has been on a serious roll of late, placing 20th in 2003 for Dark Blue (lead), 18th in 2004 for Miracle (also lead), and 11th in 2005 for Sky High.
Posted by md'a at 3:51 AM

I predicted Affleck in supporting, but he belongs in lead. Good work guys.

If I believed he only began directing with The Ladykillers, then yes. But apparently it was just that it took them that long to obtain a DGA waiver allowing them both to be credited. (I'm confused about that given the various other sibling directors who've always been credited as The X Brothers, but that's what I recently read somewhere.)

It was a DGA waiver all this time? Dang, what a bunch of hard-asses. Of course, I had long heard that they "really" shared directing duties, and had long wondered why they had kept up the charade of one brother being the producer and the other being the director.