Festival Flashback: Week of Crap I Keep Forgetting to Do This 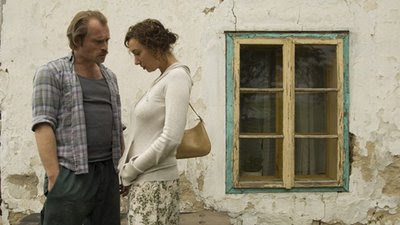 Revanche (Götz Spielmann, Austria): 79 [Toronto '08]
[I hereby nominate Spielmann—see also The Stranger, which played here in 2000, and Antares, class of TIFF '04—as the most interesting filmmaker to whom nobody's paying any attention whatsoever. Revanche admittedly sounds pretty banal in broad outline, which is why I've spent the last 24 hours ducking questions from friends about what makes it so awesome. In execution, however, it's a thing of sheer beauty, the kind of film in which the details of each individual scene—composition, rhythm, performances, stray bits of business—are all so perfectly judged that their cumulative force kind of sneaks up on you. "Protagonist sublimates rage by chopping firewood," for example, isn't an idea that's gonna wow anybody on paper, but in Spielmann's expert hands this recurring motif takes a giant buzzsaw to your nervous system, just by virtue of the way each scene is shot and how it's placed relative to the events that precede and follow it. In short, Revanche is extremely well-constructed...and if that doesn't sound like a compliment to you, then this might not be your kind of movie. Which would be a shame.]

(SECOND VIEWING, TWO DAYS LATER)
[No change in rating—it's ultimately just a bit too neat and tidy (even for me) to be truly great, especially w/r/t the policeman's wife and her empty nursery. (I also noticed this time how much it echoes The Son, though I think it improves upon that film in several key ways—tragedy much more recent, potential victim himself nearly prostrate with grief.) However, a second viewing ensured that Johannes Krisch, Ursula Strauss and Irina Potapenko (whose work is deceptively simple; btw, kudos to whoever did the English subtitles for her mangled German) will be dominating my Skandies ballot in the unlikely event that Revanche gets a New York release sometime in the next two years. [May '09: Good job Janus/IFC.] Krisch in particular is just tremendous—volcanically expressive when the moment demands it, but also capable of heartbreaking stoicism. And the dude can chop a motherfucking log.]

Adoration (Atom Egoyan, Canada): 60 [Toronto '08]
[In which our hero, after a decade's worth of laudable but never quite satisfying attempts to stretch 'n' grow, finally gives up and retreats to his signature style: chilly, stilted, intricately fragmented, solemnly ludicrous. For this rabid fan of old-school Egoyan, it felt like a homecoming, which perhaps makes it easier to forgive the way that Atom's potentially rich ideas about terrorism and technology ultimately wind up in the service of his usual bizarro-world take on grief management. Plus he somehow gives Scott Speedman gravity, which should be some special Genie award right there.]

Three Monkeys (Nuri Bilge Ceylan, Turkey/France/Italy): 49 [Toronto '08]
[Though I don't entirely trust my reaction, since a big part of my disappointment stems from the film's dingy, pixelated videography—close-ups often looked to me like they'd been shot through a screen door—whereas the other reviews I've found, both pro and con, uniformly rave about the film's hi-def majesty. (Climates is the most visually stunning vid-shot feature I've seen to date, and Ceylan apparently used the same camera here, though I would never have guessed that.) All the same, this is at bottom a tediously threadbare tale that spins its wheels for well over an hour, only picking up steam once Dad is released from prison and the recriminations can begin in earnest...which only amounts to brooding and sweating, for the most part, but that's way more dynamic than what we'd been subjected to previously. Final third is fairly magnificent, but even then I was distracted by how muddy everything looked. Did they use the wrong projector or something?]

Il Divo (Paolo Sorrentino, Italy/France): 46 [Toronto '08]
[I'm a defender of Sorrentino's hyperactive style, and it's certainly bracing to see it applied to that most staid of subgenres, the political biopic. But this film is nearly impossible to follow if you aren't well versed in the last several decades of Italian-government scandal—the names and allegations just keep flying, and you can only shrug. Toni Servillo's performance, as always, is good for some odd pathos.]

Treeless Mountain (So Yong Kim, USA/South Korea): 41 [screened in NYC just prior to Toronto '08]
[For fuck's sake plant something. In Between Days didn't exactly feel sui generis, but Kim's take on adolescent fumbling and dislocated yearning was nonetheless distinct and nuanced, predicated upon characters and situations that were both archetypal and slightly off-kilter. Without puberty to confuse various issues, however, she goes on autopilot—this is just Child's-Eye 101, a bland rehash of Nobody Knows (though here the kids are dumped with a mean aunt rather than wholly abandoned) that dutifully hits every sad-little-moppet trope known to world cinema. Representative maudlin touch: Before she bails, Mom gives her two daughters a piggy bank (literally in the shape of a pig! when did you last see that?) and tells them that every time they obey Mean Aunt, they'll receive a coin; when the bank is full, Mommy will return. If you can't fill in the next half hour of the movie, you haven't been watching many Iranian films over the last decade or so. Kim certainly has.]
Posted by md'a at 1:54 PM

"For fuck's sake plant something."