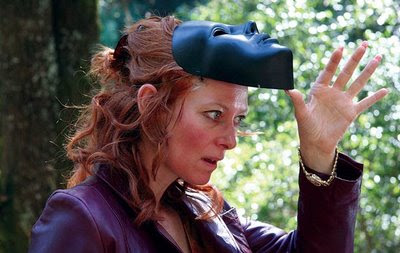 Julia (Erick Zonca, France): 81
[No time to write anything elegant and/or cogent, what with preparations for Cannes well underway (including writing all of next week's stuff this week), but this unfairly maligned barnburner demands to be seen, and surely there's no point in having a blog if you can't occasionally post in distracted haste. So here's an annotated version of something I wrote yesterday in the Movie Nerd Discussion Group, replying to The Onion's Noel Murray, who deemed the film "pretty fucking fantastic."]

Le mot[1]. In fact it's so blisteringly awesome for so much of its epic running time that I can only attribute the Berlin '08 smackdown to people toting in dopey expectations based on Dreamlife of Angels (which I, like Waz[2], was never especially wild about to begin with; sorry The Fung[3]) and the festival blurb's suggestion that it's a loose remake of Gloria, which it isn't. As I said in Twitland, the vibe is much more Jim Thompson than Cassavetes, except this film is out of control in a way that actual Thompson adaptations—even strong ones like The Grifters and After Dark, My Sweet—never were. In fact its sense of reckless endangerment is so overwhelming that I spent almost the entire film with my muscles tensed, to the point where I was in physical pain afterwards, which the last time I can recall that happening was my first viewing of Se7en almost 14 years ago. Which is doubly amazing in that Tilda Swinton is perhaps the last talented actress on Earth I would ever have thought of casting in this particular role.

[STOP READING HERE IF YOU'D RATHER NOT KNOW WHAT THE MOVIE'S ABOUT (and in my opinion you'd rather not know if you don't already).]

Pretty much the only reason I'm (currently, pending a second viewing) pro rather than PRO[4] is that the film ultimately belongs to one of my least-favorite pseudo-genres, viz. Damaged Adult Redeemed Via Forced Relationship With Child. Granted, it sometimes rivals Bad Santa in its own evident distaste for that concept, and up until the last few seconds of the movie Julia is still thinking primarily of herself, but it nonetheless ends up more or less in the same place, and it's a tad disappointing that this crazy, spontaneous bulldozer of a movie has such a conventional endgame. But I loved it so much I'm hoping to overcome that objection.

[OKAY, THIS LAST PART IS A MASSIVE CLIMAX-RUINING SPOILER THAT YOU REALLY TRULY DON'T WANT TO READ UNLESS YOU'VE ALREADY SEEN THE FILM, WHICH AGAIN I STRONGLY ENCOURAGE YOU TO DO WHEN YOU GET THE CHANCE ON ACCOUNT OF IT IS ALMOST NONSTOP AWESOME.]

(Also, a quibble: I just don't believe that the Mexican kidnapper would buy Julia's story, newspaper reports or no. If she really doesn't give a shit whether they kill the kid or not, why even offer them half? Why show up for their meeting at all rather than take the $2 million and run? I can try to rationalize it as "it's worth half the money to me to be wanted only for kidnapping/extortion and not as an accessory to murder," but I gotta say that's a stretch.)

1. This is where you take something dated and lame, viz. affirming a statement with "Word," and attempt to make it clever again by, say, translating it into French because the film in question was made by a French dude. It rarely works.

2. Waz = Michael Sicinski. It's a shorter version of Mike Wazowski, the Billy Crystal-voiced eyeball from Pixar's Monsters, Inc.; presumably you can infer the rest.

3. Longtime member Alex Fung, who loved Zonca's debut so much that his online poker handle is derived from it.

just watching this, thanks to your ravings about it a lifetime a/k/a 3 years ago.
Gloria (1980) a Cassavetes vehicle.. grand grand NY opening shot amongst else.. Gena in her absolute prime..

alright, i just finished watching it now.
and it's ace.
and the overall drift is a conservative one.
in Gloria what's at stake is the self-sacrifice of the "mother". over her pride and her love for the kid.
here the sacrifice of the "son" is at stake, between love and money.
that's about what has changed from 1980 to 2009.
and that's why Julia is still ace.