The Singular Frustration of Alejandro Adams. 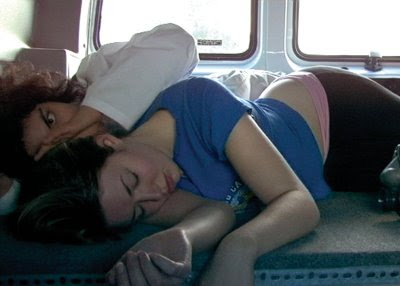 Here's the potential problem right off the bat: I just spent several minutes thinking up a title for this post—not on the basis of what might be clever or intriguing, but because I was trying to come up with a description that Alejandro himself would enjoy. (And I think I nailed it, I have to say, short of "GENIUS INCOMING EVERYBODY DUCK!!!!")

It's a sign of how things are changing that Alejandro Adams is the first filmmaker whose existence I discovered entirely via my Twitter feed, where he's been a frequent @ reply* among folks I follow for the past few months, along with his wife and collaborator Marya Murphy. At some point I checked out his profile and discovered that he lives in San Jose, CA, which further stimulated my curiosity since almost nothing of interest ever emerges from that sprawling faceless suburb. (I escaped 17 years ago, though I'm now forced to temporarily semi-return for financial reasons.) And then a few weeks ago Adams contacted me via e-mail and asked whether I'd be willing to look at the two features he's made to date. I told him I'd give at least one of them at least 40 minutes to grab me. And grab me it did, because this fellow is immensely talented, even if so far he's channeling that talent in a direction that I happen to find a little maddening.

Superficially, Around the Bay (2008) and Canary (2009) couldn't be more different; conceptually, they're nearly identical. One is more interesting than it sounds in bare description, the other is...well, not necessarily less interesting, but it does deliberately withhold/ignore almost everything you'd likely expect based on a logline. I don't know that summarizing them does them any real favors. What makes both films interesting is Adams' unique directorial style—the most radically anti-narrative approach I've seen from an American feature filmmaker in a long while. (I'd have to go back to Nina Menkes for an analogue; that you've probably never heard of Menkes is telling in itself.)

Unfortunately, I happened to see these ambitious, somewhat daunting films right before I left for Cannes, and didn't have a chance to write about them while they were still fresh in memory, so I can't be as detailed and lucid as I'd like. But I was immediately sucked in by the opening "scenes" of Around the Bay—scare quotes required because Adams doesn't craft traditional scenes so much as accumulate shards and fragments of experience. If that sounds pretentious, it doesn't generally play that way in context. I knew I was in the hands of a potentially major talent during a long, extraordinary early sequence in which Daisy (Katherine Celio), a college-age woman who's been summoned by her cold, distant father to help care for her 5-year-old half-brother, Noah (Connor Maselli), first plays babysitter. Having been raised in an emotional vacuum, Noah proves incorrigible, to put it mildly; rather than telescope hours' worth of mounting frustration and chaos into a single representative incident, however, Adams gives you the entire day, a few telling seconds at a time, creating a cumulative effect that conveys Daisy's exhaustion and impotence more viscerally than any "scene" possibly could. I've been trying to come up with a point of comparison derived from other films, and finally hit upon one that works, but it's so random and obscure that I'm not confident it'll make sense to more than two or three people who'll read this. But here goes anyway: Imagine, if you can, the scene from Kramer vs. Kramer in which Dustin Hoffman says no ice cream until you finish your dinner and the kid goes for the ice cream anyway—actually, imagine not that scene per se but the emotional content of that scene shot and edited like a narration-free version of the European vacation interlude from The Rules of Attraction. But at a more relaxed pace and running for something like ten minutes.

Equally arresting is Adams' use of asynchronous sound throughout the film, usually in conversations between people who are doing more talking than listening. Shots of moving lips are accompanied by the sound of clanking cutlery; dialogue is overlaid over images of the characters silently chewing their food. One key dramatic scene elides words altogether, opting instead for the ambient noise (wind, crickets, so forth) from outside the house. Adams leans on this gambit a bit too hard for my taste, to be honest—I find such alienation devices more effective when used sparingly. But that complaint is related to my overall problem with his work to date, which tends—by design—to stagnate and circle, like water over a badly clogged drain. (Forced metaphor courtesy of my own personal shower, though I finally remembered to buy Drano yesterday.)

That tendency is amplified in Canary, which I seem to be nearly alone—at least in the Twitosophere—in finding intriguing but flawed. On paper, this one is right up my alley, rooting a sci-fi/horror premise in mundane corporate jargon that's arguably even more disturbing than the anti-human policies it's meant to casually obfuscate. (Sorry, that sort of talk is contagious.) Adams remains admirably committed to a detached, voyeuristic species of naturalism, observing what I assume are largely improvised interactions between resolutely ordinary characters who—and this in itself is kind of thrilling—never evince the slightest clue that they're living in a scary dystopia, simply going about their quotidian business until, uh, some of them aren't allowed to do that anymore. It's a bold, challenging, imaginative and supremely assured film, and the only reason I can't huzzah along with everyone else is that I "got it" after about 45 minutes, and Canary runs twice that long. Same with Around the Bay, which I felt that I'd grasped in its entirety a good half an hour before it actually ended. By his own admission, Adams makes no real effort at forward motion, and he doesn't even work in wittily minute variations à la say Jarmusch. "[My films] very pointedly do not proceed but travel on a loop—the same scenes restaged ad infinitum," he noted when we argued politely about them on Twitter. Apparently many people find that plenty rewarding. For me, both films are so fundamentally conceptual, and so little concerned with anything resembling "entertainment," that they hold my interest only so long as they retain some degree of mystery vis-à-vis their intention. With Canary in particular, there just came a point where I felt like I was watching a remake of the first half of the film rather than watching its second half, if that makes sense. Even the final scene seems to do little more than make explicit something that I thought had already been communicated multiple times, to the point where I was brought up short when Michael Sicinski acknowledged that "at the film's conclusion, we learn a bit more about [what a particular character has] been doing all this time, something that recodes her activity throughout the film." I really did not think anything got recoded, either there or anywhere else in the film. The very concept of recoding seems antithetical to Adams' modus operandi, except in the macro sense that he's recoding certain burned-out genres as woolly avant-garde experiments.

A simpler—though admittedly kind of Neanderthal—way of phrasing my essential problem with these two films is: They're too long. Now, Adams is in most respects stubbornly unconcerned with commercial viability. (Though, at the same time, he's an aggressive and savvy self-promoter within the rarefied world of hardcore cinephilia, as evidenced by this very blog post.) But I did suggest to him that the one concession he's made to the world's expectations is making films that run around 90 minutes, rather than only 60 (which I think would suit Around the Bay) or 45 (Canary imo). He bridled. And maybe I'm off-base in that insinuation—though it's unquestionably true that if you were to make a terrific 45-minute film it would be seen by approximately nobody on planet Earth, simply by virtue of being an inconvenient length. Whatever the case, so far Adams has made movies that cease to interest me once I feel like I've fully grasped their essential nature, because at that point they just keep repeating things I already know, without sufficient variation to make the repetition itself pleasurable or stimulating. (Some seem to find the effect hypnotic, but, well, hypnosis famously doesn't work on everybody.) And yet, for all the frustration it inspires, his work is so much more ambitious and intelligent and accomplished than most of the Amerindie films that come out of Sundance every year that I still find myself eager to see what comes next. Which is exactly how I used to feel about Lars von Trier when it came to world cinema. Lars eventually won me over, and Alejandro may yet.

* Incidentally, this is why Twitter's recent decision to hide people you follow's replies to people you don't follow is dunderheaded. Unless they somehow profit if we all start following more people, in which case it's diabolically brilliant (though I've managed to resist thus far).
Posted by md'a at 12:20 PM

Are the movies avaliable somewhere in the internet? Or somewhere else?

You'd have to ask Alejandro. [Hisfullname]@gmail.com

For the record, I was referring to the fact that I didn't realize until the final shot that the silent repo woman was staging fake repos and replacing the unrepo'ed organs with the unDT jelly. There were clear hints that she was doing something to sabotage the organs or somehow thwart the Canary process, but I didn't glean conclusively what it was until the end. But then, I'm famously dense when it comes to plot details.